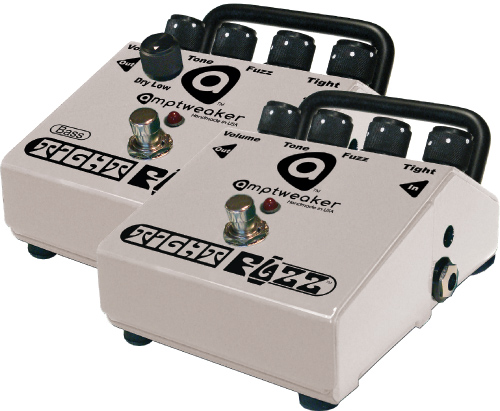 Since the birth of the fuzz pedal in 1960s, its scratchy, buzzy, sometimes “psychedelic” sound has freed the creativity of many guitar players. Now, the crew at Amptweaker is seeking to feed that creative “buzz” with its new Tight Fuzz and Bass Tight Fuzz pedals.

Housed in powdercoated steel boxes, both operate on a 9-volt battery or a DC power. Controls, jacks, and switches are chassis-mounted, including a true-bypass footswitch and an effects loop with pre/post setting. A nice stylistic touch is provided in the form of recessed LEDs that illuminate the controls, which consist of knobs for Volume, Tone, Fuzz, and Tight, and three slide switches labeled Tone, Transistor, and Edge: Tone adjusts overall response between ’60s (thinner) and ’70s (thicker) sounds, Transistor switches between a warmer Germanium setting and brighter/higher-gain Silicon transistors, and Edge can be set to “Smooth” to soften the pedal’s overall fuzz.

With a Gibson Les Paul Standard Plus running through a Fender Deluxe and a G&L JB played through an Ampeg B200R combo, both pedals offered great interaction with the well-voiced, high-roll-off-style Tone knob, while the ’60s/’70s voicing switch did the bulk of the work shaping the tone of the fuzz sounds. The Transistor switch conjured a wide range of fuzz sounds, covering everything from classic thin and scratchy Fuzz-Face-style effects to thick and thumpy full-spectrum sounds. The germanium setting offers less gain and a bit smoother fuzz effect overall, while the silicon option is hotter, with a sharper and more-cutting sound. The Tight control and the Edge switch allow for some precise final tweaking. The Tight control, in particular, does a great job of focusing low-end response and upper midrange, giving the pedal more of an overdrive/distortion voicing.

The controls and layout on the Bass TightFuzz match the guitar version with one very important addition – the Dry Low “blend” knob, which allows the user to mix uneffected/dry low-end with the fuzz sound. The result maintains a clean, round low-end response while giving nice grit and sustain on the high-end.

Adding to the versatility of both pedals are built-in effects loops with pre/post (fuzz) switches. We tried a number of effects into each, including an overdrive (which really ramped up the fuzz and sustain), and an envelope filter that produced fuzz reminiscent of an E-H Bassballs box. The loop is engaged only when the fuzz effect is, so both can be turned on with one stomp.

Amptweaker’s TightFuzz and Bass TightFuzz are two very versatile fuzz pedals, with tons of options and control that offer a huge palette of fuzz sounds packed into a pro-quality pedal.