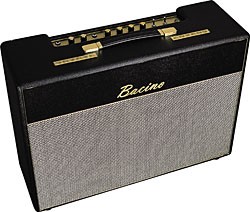 Mike Bacino makes no bones about his mission in recreating the Marshall 18-watt model 1958 2×10″ combo from the mid 1960s. The original amps are rare and sought after (if you can find one, it’ll set you back $5,500 or more!), so Bacino decided to hunt down the legend and let anyone who really wanted the sound obtainable only in this design get it without searching the world over and/or having to second-mortgage their house.

Bacino started dabbling in electronics at an early age, figuring out how to repair an old Conn organ. He started playing guitar at age 11, and in high school took two years of electronics. Though helpful, the class never touched on tube theory, and Bacino learned 99 percent of what he knows from reading and hands-on experimentation. Being dissatisfied with the solidstate amp he was using at the time, he later added at tube preamp to an old organ amplifier. That was when the bug bit.

While playing in small clubs in the Chicago area, he modified and built tube amps for himself, friends, and bandmates. A few years later, he called Mark Baier at Victoria Amplifier, asking about potential work. Baier hired him, and Bacino spent four years helping build Victoria amps.

For a long time, Bacino played through an 18-watt Marshall. As the popularity of those amps grew, he researched and manufactured parts to duplicate them. His one-man operation became official in 2002.

In terms of cosmetics, the BAC 18 is a faithful recreation of the Marshall Models 1958, 1973, and 1974. Its power and output transformers were reverse-engineered, duplicating the Radio Spare units in his original Marshall. Circuit boards are cut from the same 1/8″ stock, purchased from the same manufacturer, staked with RS turret lugs, and hand-wired using the correct layout and lead dress. The plexi faceplate is reverse-screened, with font and spacing identical the original. The aluminum chassis is also identical, and 13-ply Baltic birch is used for the flawlessly fingerjointed cabinet. The BAC 18 is available in all of the common Marshallesque configurations – 1×12″, 2×10″, 2×12″, 1×15″ – and as a separate head. Bacino also builds a 2×12″ extension cabinet. Other shared traits include cover color options (black, white, orange, red, purple, green) and grillecloth (including a duplication of the famous “Bluesbreaker” grille). 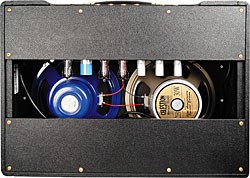 The BAC 18 sports a retro aesthetic, and in terms of construction is very sturdy. Peering inside is like looking into an old Marshall; everything is tidy and authentic.

Bacino spares no expense in terms of components. Our test amp sported hard-wired Celestion G12 Alnico Blue and G12H Anniversary speakers. The tube complement consisted of two JJ EL84 output tubes, one JJ 12AX7 and two GT 12AX7M tubes; one as the phase inverter, the other as the tremolo channel’s input stage and oscillator. A new old stock (NOS) International Servicemaster-branded Mullard 6CA4 serves as the rectifier tube. NOS power and preamp tubes are available, while coupling capacitors are by Mallory and Audience Auricaps, along with electrolytic capacitors by JJ, F&T, Rifa, and Sprague.

To the heart of the matter at hand – the amp’s sound – we used a late-’70s Ibanez Artist with Wolftone humbuckers, and an early-’70s Fender Stratocaster. We plugged into channel one with the Ibanez and set the tone midway.

Moving the volume control toward maximum, we were greeted with the expected increase in overdrive saturation; great vintage plexi tone, especially with the volume knob between 8 o’clock and 10 o’clock, with even breakup and fantastic note separation.

Looking to dial in a bit more “fatitude,” we plugged into the B channel and again set the tone midway. The tone again fattened as the volume knob moved clockwise. But then, as the knob approached 8 o’clock , the BAC 18 revealed just what British tone is all about – and why the original Marshalls are so soughtafter: full and fat, with smooth, balanced overdrive and fabulous note separation. The notes practically jumped out of the amp! “What about harmonics?” you ask. How ’bout rich and completely in-your-face? Presence is downright addictive regardless of pickup position, and touch sensitivity is stunning.

Backing off the volume, the amp cleans up nicely. This amp doesn’t have – and doesn’t need – a true clean channel.

As we backed off the tone control of the bridge pickup, we discovered definitive “woman tone.” The BAC 18 doesn’t produce a lot of gain, but with a good overdrive pedal, it should do so very well.

Going in, we were skeptical about how the BAC 18 would sound with the Stratocaster. But we plugged it in and were again greeted with fat and full, but with an added clarity and sparkle. Notes popped with a responsiveness we haven’t heard in any amp before. The neck and middle pickups sounded best.

We found the tremolo circuit very smooth and pulsing. We couldn’t slow it down to the point where some may like, but again, here the BAC 18 resembles the Marshall 1958. Besides, tremolo is not what this amp is all about. And in case you’re wondering about volume, this is a very loud 18 watts! It would provide enough volume for most any situation.