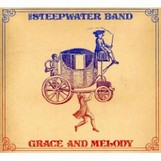 It’s easy to dig the Steepwater Band, and on this, their fourth studio record, the Chicago trio steps it up a notch with the help of producer Marc Ford, whose tenure with the Black Crowes produced some of that band’s best music.

While it’s usually difficult to define what a producer does, here Ford’s input seems obvious. Guitarist Jeff Massey decorates the album with great playing throughout, starting with “At The Fall of The Day,” a stomping rocker with a great riff and sound. By the time Massey’s half-wahed solo breaks out, the listener is very aware they’re in for a treat.

Big guitar sounds also abound on cuts like “All the Way to Nowhere,” with its Beatle-like feel. “Waiting to Be Offended” has a great lyric and an extended guitar jam that stretches the song past 10 minutes. Despite the length, it’s never boring. Rather, it’s hypnotic in a manner similar to a Neil Young jam. “Fire Away” is a bluesy rocker with a plaintive solo by Massey, who plays a lot of slide throughout. “World Keeps Moving On” is a melancholy meditation that finishes as in a cacophony. And Massey’s slide provides just one element of the excellent “Healer,” a funky rocker with scratchy rhythm guitars and suprising chord changes.

Grace and Melody hints of previous Steepwater records, but continues the band’s evolution. The songwriting is growing in directions that keep the band attached to the history of rock and roll while they actively expand it. Massey, along with bassist Tod Bowers and drummer Joe Winters, continue to impress as one of rock’s shining lights.