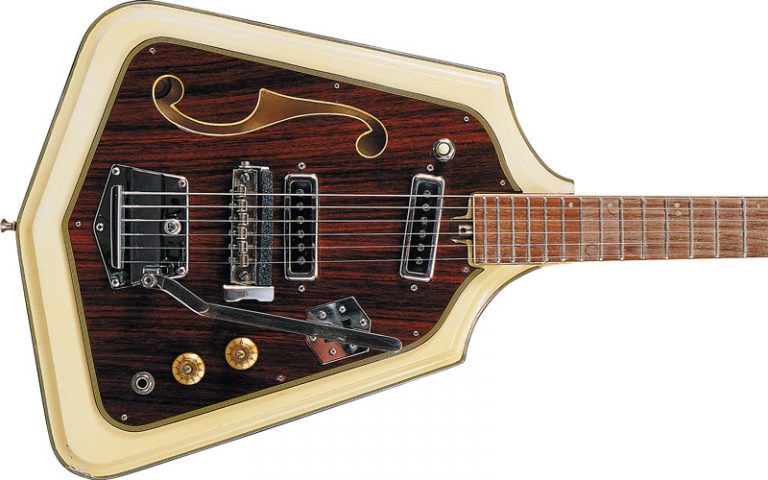 California. The Left Coast. It was probably home to North America’s earliest inhabitants, as emigrants from Asia crossed the Bering Strait and began their march toward South America.

But California figured little in much of anything else until 1848, when the folks setting up a lumber mill on John Sutter’s property near San Francisco noticed sparkly little stones in the mill-race water. The Golden State. The territory went from 3,000 non-Indians in 1847 to 100,000 plus by 1849, most working the mines, the rest working the miners. It rushed into existence overnight, without history, without government, without laws. It became a state in 1850. Fast-forward, and along came Hollywood. Then came the Hippies. So it should come as no surprise that California has a reputation for non-traditional free-thinking, and for being occasionally weird. And therefore it is no surprise that when guitarmakers wanted to name an outré guitar design, they attached an association with California, as with this 1967 Domino Californian Rebel!

Japanese-made Domino guitars were latecomers to the American guitar boom of the 1960s. Domino electric guitars debuted circa 1967, imported from Japan by Maurice Lipsky Music Company, Inc., 30 Irving Place, New York, New York 10003. Lipsky was one of those fairly large regional music distributors associated with the district around Cooper Union and was best known for his Orpheum brand guitars dating back to at least the late ’40s. Most of those were low- to middle-end guitars, many made by United Guitars in Jersey City, which also supplied many Premier guitars to Peter Sorkin, also of New York. Many Orpheums were archtop electrics, some fancy, some small-bodied plain guitars with no f-holes. Lipsky was also briefly involved with the late Italian guitarmaker and conceptual artist Wandré Pioli, who made Wandré guitars with the aluminum neck, and sold guitars to Chicago’s Don Noble, who marketed them as The Noble Guitar in 1963 or so. Wandré guitars carrying the Orpheum brand have been sighted, probably distributed out of New York by Lipsky. There is no current evidence that the Domino brand was used before the advent of the Japanese models in 1967.

When Domino guitars appeared, the line reflected two emerging trends in the evolution of Japanese guitar design. On the one hand was the growing practice of imitating popular guitar designs. In a way, you could argue that early Japanese guitars loosely modeled after the top-of-the-line Fender Jazzmaster was the first step in that trend, but by the later ’60s they were clearly going head to head with the competition. On the other hand, there was an increasing presence of an often whimsical “Japanese” identity reflected in other models.

The former conception included Fender-inspired guitars such as the Domino Olympic, Spartan, and Dawson, based on the Stratocaster, Jaguar, and Coronado, respectively. Another model was the Red Baron, clearly based on the Gibson SG. The Domino Fab One was – isn’t it obvious?! – based on the EKO Violin Bass. The Tear Drop echoed the Vox Mark series. The Domino Californian aped the Vox Phantom. Most were available in a number of pickup and vibrato configurations. Many of these were also sold as Aria guitars, so they were probably made at the same factory. Who made the Fender-style models is unknown, but it’s entirely possible that it was a young Matsumoku. The Fab One, Tear Drop, and Californian were almost certainly built by Kawai.

Then there was this #80E2 Californian Rebel, a guitar unlike any other. While it may be too much to claim this design as characteristically “Japanese,” it was certainly original and whimsical! The asymmetrical trapezoidal body of this guitar is essentially solid mahogany, with a “sound cavity” routed under the f-hole in the strange woodgrain pickguard. The top has a German-carve relief around the edges. The maple bolt-on neck is very thin for a ’60s guitar, somewhat at odds with the retro effect of the slotted headstock! What looks like body binding is actually painted on.

Electronically speaking, this is fairly typical of mid-’60s Japanese guitars. The two sliding switches change capacitors for rhythm and lead modes. These big, chunky single-coils can provide a surprisingly beefy tone, though output can vary widely on these units. If switching capacitors isn’t enough, and you really want to lay back, throw on the foam-rubber mute!

Several Californian Rebel models were offered, including the #80E1 with one pickup and the #80E3 with three. The three-pickup model was also sold in a 12-string version, and there also may have been a bass, but that’s uncertain. They may have all been finished in white, but other colors are a possibility. The pickups, hardware, and exotic shape are pretty much dead clues that this guitar, too, was built by Kawai, which purchased Teisco in January, 1967, and was soon to be responsible for producing other exotic guitars such as the Kawai Concert and Teisco May Queen.

Lipsky’s Domino line does not appear to have lasted especially long, perhaps not beyond 1968. The fabled guitar boom of the ’60s was winding down. Sales (and imports) had begun to slow in ’67, and in ’68 Valco/Kay went out of business, signaling the end of one era and the beginning of another. Looming on the horizon was the so-called “copy era” of the ’70s, of which Lipsky’s other models were the harbinger.

Domino guitars do not seem particularly plentiful on the market, and the Californian Rebel is the most desirable. In spite of the pending success of the copy strategy, the uniqueness of Domino’s Californian Rebel was also a sign of what was to come, as Japanese guitarmakers strove to inject more of a Japanese identity into select models, as seen in guitars such as the Kawai Moonsault and Ibanez Iceman that debuted circa 1975. More freewheeling freethinking that would be well worthy of identification with the state of mind that is Kaal-ee’-fornya (in Arnold-speak)!

History of the Fender Bassman