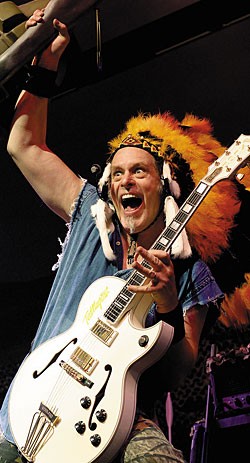 Depending on one’s musical or sociopolitical point of view, a new release from the redoubtable Ted Nugent can initiate one of several reactions. It can be cause for celebration, a reason to crank up the anti-Nuge propaganda machinery, or a reason to duck for cover.

Nugent is one of the most polarizing figures in popular music – and the American media – today. And the original Rock & Roll Animal wouldn’t have it any other way. The guitar slinger turns 59 on December 13, and he shows no signs of mellowing, either in his opinions or his music.

Nugent’s new album, Love Grenade (Eagle Records) underlines the ongoing ferocity in his sonic adventures and attitude. In fact, one version – a limited edition with a photo of a nude woman on her knees on a giant platter with her hands bound behind her back and a grenade in her mouth – could have proven controversial if it hadn’t quickly sold out. Also potentially controversial is the album’s title and even its standard cover, which shows a hand grenade wrapped in a pink remembrance ribbon.

“That came from a charity event where we raised a lot of money for the war on breast cancer,” Nugent said. “The award for raising the most money was a grenade with a pink ribbon on it, and I thought it was one of the coolest things I’d ever seen! And I had just finished a venison-for-military charity, and knew from walking the streets of Fallujah in ’04 with the Marines that when an American military hero throws a grenade at a bad guy, it’s a ‘love grenade’ because he loves freedom. A grenade is a weapon to be used against evil. I have a great relationship with the guys in the military; I communicate with ’em every day, and I’m going to entertain the troops at Guantanamo Bay soon.”

Love Grenade was co-produced by Nugent and former Damn Yankees bandmate Jack Blades, who played bass on three songs. The primary rhythm section on the album, Barry Sparks (bass) and Tommy Clufetos (drums), has been with Ted for several years. However, on tour last summer Nugent was joined by Dokken founder Mick Brown on drums and Greg Smith on bass, as Clufetos was booked with Rob Zombie and Sparks had a family illness that kept him from touring.

Nugent said the album was recorded live in the studio. Once again, he used Gibson Byrdlands on the bulk of the songs, augmented with Les Pauls.

“I’ve got some ’59s,” he said. “And they’re worth a fortune, so I don’t take those on the road anymore. The reissue Les Pauls sound so damn good that I don’t think it matters… but a connoisseur like Billy Gibbons might disagree! I love playing the Les Pauls on tours, but I also use a PRS on songs like ‘Little Miss Dangerous’ and ‘Fred Bear’.”

Nugent’s primary amplifier these days is a prototype Peavey he helped develop. The production version should debut in ’08.

Among the tracks longtime fans will appreciate on Love Grenade is a reworking of “Journey to the Center of the Mind,” recorded by the Amboy Dukes, the band that vaulted Nugent to prominence in the late ’60s. It’s more raucous and bare-bones than the original, and Blades and Tommy Shaw (another Damn Yankees alumnus) add backing vocals.

The disc also has three songs, “Geronimo & Me,” “Eagle Brother,” and “Spirit of the Buffalo,” that are tributes to Native Americans. The latter incorporates a distinctive, brittle guitar tone. “That’s a PRS, dialed into that Strat/twang sound that I love.”

Nugent says that when he is writing songs, things sometimes take time. “Bridge Over Troubled Daughters,” from the new album is one example; Nugent played a portion of the song during an interview with VG in 2003. But he says inspiration is always at hand. “I have a guitar in every room, and I can’t go through without grabbing one,” he chuckled. “I’m always working with my hands, whether it’s in swamps and on trees with a chainsaw, or guns, or bows, or working with a guitar. But every time I pick one up – even if we’re recording and we’ve got a song planned – when I start tuning my guitar, a brand new pattern or variation comes out. So I’m not always writing, but I can’t stop the creative juices.”

Love Grenade concludes with “Lay With Me,” an extemporaneous take on “Hoochie Coochie Man.”
“We found ourselves jammin’, just kinda gruntin’ along when we were about to wrap up a session, and Jack recorded it,” he said. “We played it back, and it was so cool we decided it had to be on the record.”

The album was released around the time Nugent’s ’07 tour ended, and he probably won’t go back on the road until the spring of ’08. The odd timing means he won’t immediately tour to promote a new release.

“I sure as hell should,” he summarized. “I had many offers to go out in October and November, and we’ve had great offers in Europe – Love Grenade has been a big hit there. But now more than ever, I need to return to the great outdoors. I’ve already given up three important hunting days, but that’s for the Marine Corps when I go to Gitmo. My hunting commitments take me through January. There’s already talk about going to Europe as early as April, but there’s also talk about doing some Stateside gigs around the same time.”


This article originally appeared in VG‘s January 2008 issue. All copyrights are by the author and Vintage Guitar magazine. Unauthorized replication or use is strictly prohibited.
TED NUGENT – Great White Buffalo, 08-10-08 Hamburg, NY