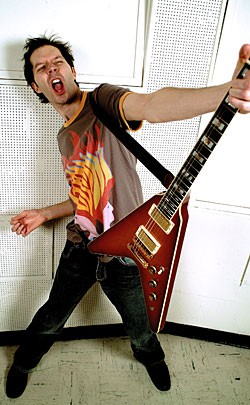 Any guitarist who can play Emerson Lake & Palmer’s “Karn Evil 9” and nail the keyboard solo is a bad motor scooter. Paul Gilbert is one such guy. From his early days with the neo-classical metal band Racer X to the Grammy nominated Mr. Big, Gilbert has always played scarifying guitar. With 11 solo albums in his back pocket, Gilbert’s latest offering, Space Ship One, continues to display his fondness for Beatlesque power-pop, spellbinding shred, and left-field covers. It’s a treat for guitar freaks and pop fanatics alike.

Vintage Guitar: For a shredder, you’ve got a great pop sensibility.
Paul Gilbert: Thank you. I hope I have a great metal sensibility as well (laughs)! I always crack up because the words “pop” and “sensibility” are always used together. You never hear anyone say “metal sensibility.” I’m starting that right here! And the word “shred,” to this day, gives me the willies. It was invented way after I was interested in fast guitar. I started playing in the ’70s. I was into Jimmy Page. My heroes were Joe Perry and Brad Whitford. By the time the shred people came around, I was more interested in figuring out Todd Rungren pop songs and keyboard parts from Emerson Lake & Palmer.

Do you feel like a pop songwriter trapped in a shredders body?
I don’t feel trapped, because I have freedom to do what I want. I want to be a good guitar player, and to me, that meant taking away as many limitations as possible. To be able to speak through the instrument without having technique get in the way.

What is it with you and post-punk power pop?
I like The Ramones. I love Green Day! I’ve always loved Cheap Trick, and I’ve always loved taking the structures of The Beatles and making it a little harder. If you added up the shred guitar music I’ve listened to as a fan over the last 10 years, it might add up to about half an hour. I think I’d be much more successful if I decided to be a solo guitar instrumentalist, hopped on a G3 tour, and only played harmonic minor scales really fast. But I have to play what I like. I like pop music and I love crazy guitar and I have to put them together. I love the juxtaposition. 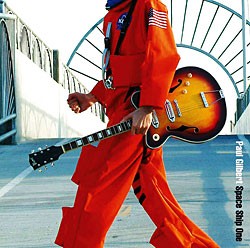 Talk about Space Ship One.
It was the first time I’d really done a record in a big studio since my Mr. Big days. We played the whole album pretty much as a concert. Because we did a lot of rehearsing, I got more influenced by the other musicians than I normally would. That pushed it in a more rock direction because I tend to write more pop songs than I should. The first half of the album is pretty straight heavy rock with progressive or metal elements. The second half has more pop stuff. There’s a rockabilly number, a cover of George Harrison’s “It’s All Too Much,” and there’s an acoustic song.

What kind of gear are you using?
A Laney VC50 2×12″ combo. And I love my ADA Flanger – I get to pretend I’m Pat Travers. I’m a huge Pat Travers fan. I’ve gotten so much from his playing and his sound. I’m trying to bring it to the kids. I’m also using the MXR Phase 90 because I love old Van Halen solos. I collect Ibanez guitars from the ’70s and ’80s. I’m playing a killer Rocket Roll II.

What is it about Pat Travers?
When I went to GIT, I discovered diatonic harmony and three-note-per-string scales. It was a very powerful feeling. I thought this explained all music, because I was into Iron Maiden-ish heavy metal at the time. Whenever I’d go to a blues jam, I would sound horrible. None of the minor scales worked. I had no vocabulary in that style. I had one once but getting into diatonic harmony and metal destroyed my blues playing. Pat’s Go For What You Know album saved my soul in that sense. I started figuring out the solos on it, and redeveloping a blues vocabulary. When I say “blues,” it’s more rock with a blues tonality. I love the sound of his vibrato and phrasing, the ease with which he played, and what he did with the flanger and wah. Guitar players of the ’70s and early ’80s had a real ease and finesse about the way they played. That’s what I like about Pat Travers – he’s a rocker.

This article originally appeared in VG‘s Oct. ’05 issue. All copyrights are by the author and Vintage Guitar magazine. Unauthorized replication or use is strictly prohibited.