Home Music Danny Caron – How Sweet It Is 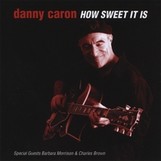 Danny Caron is a veteran guitarist whose playing with the late Charles Brown helped keep the tradition of the “uptown” guitarist alive and well. Brown, a pianist, featured Caron whenever possible, and with his second solo record, he continues to bring smiles.

On several cuts, Caron shows he’s not afraid to swing, and that no tempo is too daunting. His cover of Jack McDuff’s “Rock Candy” shows him to be a master of complementing any song and style. His solos are fine, and when he and Kent Bryson (drums) and Wayne De La Cruz (Hammond B-3) trade fours, watch your hands and feet! We even get a sample of Brown from beyond the grave on “E.S.P Blues,” a slow blues track from Caron’s archives that lets him show his chops via great fills and solos full of chords, octaves, and anything else one can do with a guitar, delivered with taste and soul.

Caron’s harmonic sense is shown best on the lovely jazz ballad, “Detour Ahead,” which clocks in at a little over nine minutes, but you’d never know it. Caron and company take the listener on an interesting journey; of the 11 cuts here, three (including the Brown cut) have vocals. “The Promised Land” and “I Need Your Love So Bad,” both feature nice vocals from Barbara Morrison.

Give Caron a chance to show what he did for so many years with Brown. He’s a brilliant soloist, but as an accompanist, few guitarists have the taste and skill to cover the ground he does.

This article originally appeared in VG‘s May ’09 issue. All copyrights are by the author and Vintage Guitar magazine. Unauthorized replication or use is strictly prohibited.