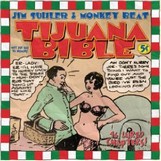 On his latest effort, Jim Suhler and his band serve up 16 cuts of boogie, blues, and other nasty forms of roadhouse music, and do it with skill and soul.

Suhler’s a man with a colorful past. His wedding was presided over by ZZ Top guitarist Billy Gibbons (his divorce “blessed” by Kinky Friedman), and it’s easy to see that some of Billy’s style had a lasting effect, even if the marriage didn’t. The crunchy rock of the title cut sets the tone. The song takes its time and features one of those “squeezed out” solos for which Gibbons is known. Suhler is also proficient at them, as he shows time and again here. Texas boogie and blues show on that and other cuts, like “Border Rock,” the very fun “Chaos in Tejas,” and a cover of AC/DC’s “Up To My Neck In You.”

But Suhler and the band are no one-trick pony. Witness the great country blues on “Po’ Lightnin,” a funky tribute to Lightnin’ Hopkins that also features searing slide guitar, a trait shared by many of the songs here. “Deep Water Lullaby” is a discreet tribute to the quieter side of Jimi Hendrix. Beautifully executed arpeggios and soaring soloing lead to a gorgeous finale with a distinct late-’60s/early-’70s feel. Another highlight is “Black Sky,” with its gorgeous melody, relentless Zeppelin-like driving rhythm, and airy and melodic guitar solo.

While Suhler proves more than capable of handling all guitar chores, there are guest appearances from Elvin Bishop, who plays slide on a cover of his “Drunken Hearted Boy,” as well as Joe Bonnamassa, and Jimmy Hall, among others.