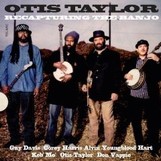 Multi-instrumentalist Taylor has never been afraid to push the blues envelope, both stylistically (ranging from Appalachian to psychedelic to explorations with jazz pianist Hiromi Uehara) and lyrically (boldly addressing social and racial issues). Even though his latest effort reaches back in time, as its title indicates, it’s far from an exercise in nostalgia or academia. And as the title also implies, Taylor is reclaiming something that was once part of black culture but has rarely been part of modern black American music, the African banjo.

Taylor’s haunting opener, “Ran So Hard The Sun Went Down,” features four banjos (Taylor, Hart, Harris, and Vappie), while Hart’s banjo on the traditional “Deep Blue Sea” is backed only by Taylor’s drumming. And Gus Cannon’s chestnut, “Walk Right In” (by Cannon’s Jug Stompers before becoming a Folk Boom hit by the Rooftop Singers), sits comfortably alongside a Hendrix-inspired “Hey Joe,” punctuated by Hart’s lap steel.

Keb’ Mo’s reading of Taylor’s inspiring “Live Your Life” is perhaps the set’s most transcendent track.

Conspicuous in his absence from any ensemble (and barely mentioned in Dick Weisman’s rather dry, pedantic liner notes) is Taj Mahal, who was incorporating banjo into his eclectic blues albums 40 years ago. This is, of course, Taylor’s project (you can find Taj’s banjo work dotting his own bulging catalog), but credit where credit’s due would have been nice.