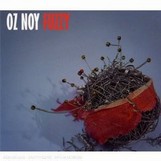 Oz Noy’s brand of fusion rests in unique bends, sounds, and flurries. His leanings are definitely jazz, but there are plenty of rock influences in the Israeli-born guitarist’s music.

Noy’s quirkiness shows up on cuts like “Cosmic Background,” where he supplies chords and choppy rhythms that at first seem a little off-kilter, but end up perfect and lovely by the end. “Epistrofunk” lets us in on his unique style. The intro is major-league funk, but by the middle is about jangly chords and an odd-time feel before it locks back in to James Brown-land. “Evidence” is another one of those quirky tunes that ultimately takes on the air of a jazz standard. Oz’s ballad work is in a place of its own, too; “Three Wishes” is stately, almost to the point of sounding like a classical music piece. “In a Simple Way” is beautiful, and his take on Prince’s “Sometimes It Snows In April” features chiming chords and a lovely middle-eastern feel highlighted by Oz’s electric sitar playing. The song is also a perfect example of the man’s chops. While it’s obvious he can play anything, his imagination and feel make him unique.

Noy has some fine help throughout the CD – names you may know, like Will Lee, Keith Carlock, Vinnie Colaiuta, and Jim Beard are huge on the New York jazz scene, so don’t be surprised to see Noy’s name becoming as familiar as theirs.


This article originally appeared in VG‘s Mar ’08 issue. All copyrights are by the author and Vintage Guitar magazine. Unauthorized replication or use is strictly prohibited.
The New Gear Yearbook