Home Music Patterson Barrett – I Must Be Dreaming 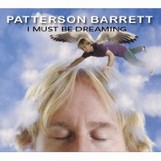 “It’s been a long time co-min'” is applicable to Patterson Barrett, who for decades has played in Austin.

Born in Washington, D.C., his family resided in a Maryland suburb of the District until he was in high school, when they moved to Manhattan.
The first instrument he learned to play was cornet, followed by an Emerlee chord organ. When he was 12, his brother was given a nylon-string acoustic for Christmas. “But it ended up with me, and I started really getting interested in music,” he said. “A cousin showed me three or four chords and I went from there.”

Barrett’s first electric Spanish guitar was a Japanese-made Cipher with pushbutton controls and four pickups. One day, he saw a print ad for a Gibson ES-330.

“I didn’t really have any idea what it was, but I got it because I thought I could play it completely acoustic. I still have it; sunburst, with an American flag decal I applied when I was 15.”

At the time, he became interested in country rock bands like Poco, Buffalo Springfield, and the Flying Burrito Brothers, which led to his becoming enamored with pedal steel guitar. As a high-school graduation gift, his parents got him a Sho-Bud Maverick.

After high school, he answered an ad in the Village Voice placed by a band called Dufine. After the band recorded with Jerry Jeff Walker (including on his hit, “LA Freeway”), his eyes turned to Austin, where he moved in the mid ’70s.

Barrett’s musical experiences have since included playing with the husband-and-wife team of Buddy and Julie Miller, as well as backing Chuck Berry, Al Kooper, Lou Ann Barton, and Nancy Griffith.

In addition to the ES-330, he plays a ’77 Fender Stratocaster, an ’83 Fender Telecaster, a Yamaha nylon-string, and a 1970 Martin D-28. He also counts on an early Sho-Bud Pro-I pedal steel, a unbranded lap steel made by Magnatone, a Jerry Jones six-string bass, and an Ovation mandolin.

Rather than tour relentlessly in an effort to “make it big,” Patterson has stayed in Austin, commited to his family.

“There’s never a good time to be away from your kids when they’re growing up, because it happens so quickly, and it’s such a rich experience,” he said. “One opportunity came along when my first-born was about one, but I would have been gone when he said his first words or took his first steps, so I couldn’t do it.”

In October ’07, Barrett released the first album with his own name on it, I Must Be Dreaming. All of his instruments were used, along with a friend’s late-’70s Rickenbacker 12-string.

He describes the album as “A folky-country thing, but there’s… soul influences. There’s also some Gram Parsons/Flying Burrito Brothers influence.” And several songs are indeed about sleep or dreams.
“I don’t ever sit down and say ‘I’m gonna write a song about such-and-such.’ I started to notice, though, there was a pattern when I decided to do a cover of a Band song called ‘Sleeping,’ which has a melancholy feel. And I really thought it came through after (Band keyboard player/vocalist) Richard Manuel died.”

Being a multi-instrumentalist meant Barrett did numerous overdubs. His guitar on some tracks has a Tele twang, but, all lead breaks were done on a lap steel, and pedal steel can be heard on three or four songs.
Buddy Miller played lead on “Take the Stage” and appears with Julie Miller on “Concrete & Steel,” a ballad with acoustic guitars, mandolin, and accordion.

Another guest is Deborah Holland, former vocalist for Animal Logic (with Stanley Clarke and Stewart Copeland), who was Barrett’s high school sweetheart. She harmonizes with Patterson on “Somewhere Far Away,” which calls to mind duets by Gram Parsons and Emmylou Harris. Family also figures in, as Barrett’s son plays upright bass on “Concrete & Steel,” while “I’ve Been Loving You For Such A Long Time” was written for his daughter.

Given his earlier homebody proclivities, to what extent Barrett will get out to promote I Must Be Dreaming remains to be seen, but the veteran has, after decades of experience, released a debut that he created on his own terms… and the knowledge that you got it right is an important part of any artist’s career.


This article originally appeared in VG‘s Feb ’08 issue. All copyrights are by the author and Vintage Guitar magazine. Unauthorized replication or use is strictly prohibited.
Current Issue