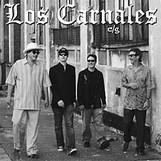 The band’s self-titled debut is a low-down, dirty affair, with heavy helpings of blues and R&B. Among the covers is a dead-on take of the classic Little Willie John hit “I’m Shakin’.”

The blues get fine treatment on numerous originals, too. Hubbard’s “DLS” is a hyper-speed shuffle. Sowell’s guitar part is all primitive jazz-blues with an amazing run up to the solo. The vocal is gruff and fits the lyric perfectly as singer Paul Bonn lets us know about his “dirty little secret.” Sowell’s playing is soulful and heartfelt on cuts like “You Better Hold Me.” His classic old-school dirty blues fits the songs menacing lyric perfectly. He also shows a nice swing side on “Riffin’ the Bass,” which, as you might expect from the title also lets Hubbard show off some chops. The only song by Sowell is the closer, “Tex Mexin.” It’s an instrumental and worth the wait. It’d be easy to simply call it a shuffle, but it’s the perfect showcase for his soloing.

This is a fine debut for a bunch of veterans who appear to be doing what they want.