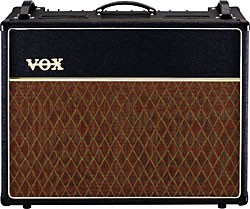 When most guitarists think of Vox amps, memories abound of the British Invasion and all of the artists – famous, semi-famous, and not-so-famous – who used them at the time. Small wonder that the legendary tone of a Vox AC30 is the reference used by so many of today’s boutique amp builders.

Vox, today a subsidiary of Korg, recently began making a high-end reissue of its famed 30-watt amp in several configurations, and offered to let us take a look at its latest – the AC30 Custom Classic (CC) with two 12″ Alnico-magnet Celestion speakers.

The AC30 was the product of the furtive mind of Dick Denny, and Vox debuted the amp in 1959. It soon became a huge part of what became known as the “British sound.” In the four decades since, numerous parent companies have owned Vox, but the AC30 has always been part of its line, remaining relatively untouched. The AC30CC2X is a 30-watt class A circuit using three 12AX7 preamp tubes, a 5AR4 rectifier tube, and four EL84 power tubes. Some major features were added to benefit the modern player, while retaining the classic AC30 tone. These include reverb, effects loop, and master volume. More subtle additions include a channel-combining switch, Brilliance switch in the normal channel, Standard/Custom switch for the top-boost tone controls, output bias switch, and a Smoothing switch (which changes the values of the filter caps). The latter two are on a back panel that also houses external speaker jacks, impedance selector switch, effects loop jacks, level and loop-bypass switches, and an input for the dual on/off footswitch for the reverb/tremolo.

The top panel hosts the standard AC30 features, including Normal and Top-Boost inputs, Normal channel volume, Top Boost channel volume, Treble and Bass controls, Tone and Mix controls, and a Drive switch for the reverb, Speed and Depth controls for the tremolo, and a Tone Cut control. Power and standby switches are also located on the top panel.

The workmanship of the AC30CC2X is flawless. The chassis is mounted in an extremely well-built marine-grade plywood cab covered in standard Vox tolex. Its grillecloth and piping are executed perfectly, as well. Some may be disappointed in the fact that the amp is made in China, but there’s no longer a production amplifier on the market, whether made in England, the U.S., or anywhere else, that can surpass the craftsmanship of this amp – period. And no, it’s not point-to-point wired, a fact reflected in its low price compared to a vintage original. The Celestion Alnicos in our test amp are the top-of-the-line variants, and push the retail price of this amp well over the $2,000 threshold. A more price-conscious version is available with Wharfedale speakers.

To test the amp, we used a Yamaha AES620 solidbody with a Duncan JB in the bridge and Alnico-magnet pickup in the neck position, as well as our familiar ’72 Fender Strat, and a stock ’59 Esquire.

Playing the Yamaha, we set the amp to clean, plugged into the Top Boost channel, and were greeted with an extremely responsive, sweet tone with punch and glassiness to spare. Notes popped, even at low volumes – this is the definitive class A tone that made the AC30 what is was, and is.

As we pushed the amp into slight overdrive, we got a fat British crunch with plenty of low-end response. Pushed all the way, the gain makes its anticipated presence more known, but the amp retains its tightness and never gets mushy. Mixing the Top Boost with the normal channel, we got an even fatter sound. We then flicked the capacitor switch, and it tightened right up, just as promised. Moving the Standard/Custom switch to its Custom setting makes the bass and treble controls less interactive, and offers more tonal flexibility. This amp is loaded with the proverbial sweet spots.

With the Strat, we were greeted with an enormous sound in the clean setting – even the bridge pickup sounded fat, smooth, and glassy. We fattened up the mids a little by blending in the normal channel. Pushed into overdrive (and beyond), the amp stayed focused and never loosened up. Midrange response is incredibly smooth and flat – very British. Plugged directly into the normal channel, which does not use tone controls, the Strat produced a well-balanced, beautiful tone.

To round out the test, we plugged in the Esquire and set the amp to clean. Tweaking the bias and capacitor adjustments, we also switched the Standard/Custom switch back to its Standard setting and dialed what we thought was some of the finest modern Tele country sound anywhere. The Bias and Capacitor switches made subtle differences that nonetheless render an even broader smile on a player’s face. By this point, we were convinced the AC30CC would sound fabulous with almost any guitar. The reverb also works great, though it is rather non-traditional. It can get boingy if driven too hard, but does an acceptable job. Also, the tremolo is very smooth and even, allowing one to dial in a very slow tremolo.

The AC30CC2X is that rarest of amplifiers through which all guitars sound great. It will please any AC30 lover, as well as most players who aren’t familiar with its tone. It has the legendary tone, and with its modern features, may be the best AC30 to date. Vox didn’t change the cake recipe, they just added more, and sweeter, frosting with this amp.