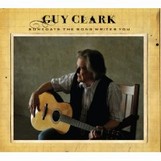 The 10 originals and one cover on
Somedays the Song Writes You feature
Clark’s well-worn vocals, with its edge
like 800 grit sandpaper and delivery dry
as the Texas panhandle. Sharing an “aw
shucks” delivery style not unlike fellow
Texan Willie Nelson, Clark never seems
to exert when he sings, yet the results
are more powerful than anything from
one of the disposable pop divas.

The songs here are nothing short of
superb. “The Guitar,” co-written by
Clark and guitarist Verlon Thompson,
tells the archetypical tale involving a
pawnshop, an old guitar, and destiny,
with Thompson’s acoustic solo burning
with a ghostly intensity. “Hemingway’s
Whisky” captures the allure of the
grain delivered straight, with no chasers.
“Eamon,” co-written by Clark and
Rodney Crowell, uses a seafaring theme
to tell a story of universal longing. The
only cover, Townes Van Zandt’s classic
“If I Needed You,” fits among Clark’s
originals like a roughed-up baseball in
an old catcher’s mitt.