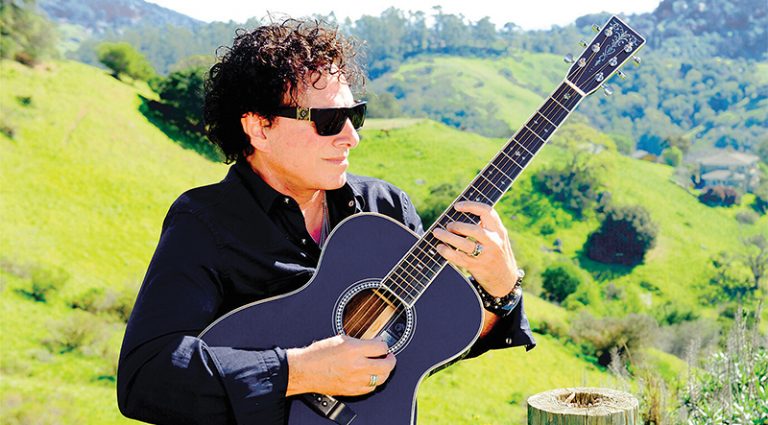 Long before Neal Schon helped Journey sell more than 80 million albums, he was a rock-fusion gunslinger who turned down Eric Clapton’s request to join Derek and the Dominos so he could tour with Santana when he was 15. With all his success, Schon still craves the rock-fusion that was a part of the early Journey catalog.

You and Steve Smith continue to show great chemistry.
Steve is a great person for me to work with; he’s not only an amazing dVrummer, he’s an envisionist. I can explain to him what I’m seeing. I didn’t go in with any demos – I just had a bunch of riffs and ideas, and made it up on the spot. As we were doing it and arranging it, he came up with ideas, too.

I could talk to him about the landscape I’m seeing in my head, and he’d chart it out. Even though it was just him and I cutting it, he’d play with that velocity with the drums. If there’s a solo section, a keyboard section, or drum part, he’ll write it out so everything’s growing, as if we were playing live with the other guys in the room.

The album’s songs sound like orchestrated freedom.
The instrumental stuff that I hear sounds too thought-out. There’s not a lot of heart in it. I wanted to grab the heart and soul of it, and craft everything around that. I went about it the opposite way for this record. There were some solos where I played live with Steve, even though there was no keys or bass. I just went off the cuff and played knowing what was going to be there. Improvisation is the most important thing on these records; I wanted to make it have some kind of life. Otherwise, you can ProTool it to death until it sounds meticulously perfect and sterile.

You and Jan Hammer have great chemistry, as well.
I love Jan. There’s nobody that can touch him as far as soloing. He is the guy! I went into this record knowing I was going to ask him to play more than he did on The Calling. I left him some big open spaces to solo. I sent him a sound file and I’m always pleasantly surprised when he sends it back to me. I was like, “Wow.” On “Schon & Hammer Now,” I had some really blazing guitar. When Jan sent the file back, I formed my solos better to play off of what he played.

How did you get your guitar sounds?
I have a Fractal effects unit I’ve been using forever. I can get any sound out of it that I want. I use it live, too. It sounds like a Marshall with 6L6s, but it’s smoother and not so edgy. I also used a Bogner Shiva with a little 2×12 bottom in a big room, and a couple of Royer microphones – one at a distance and one close. Mixed with the Fractal, I get great guitar tones.

I like recording with the sounds I’m hearing in my head. I’m not a believer in “I’ll get it later in the mix.” Usually, it doesn’t come out like what you’re thinking. Some producers would prefer to have the raw guitar with nothing, so they can do what they want to do with it. That’s why I’m producing these records; I can make sure that I’m sounding like me. The guitar is my voice and I know what I want it to sound like. I am an echo freak, I admit (laughs). I just hear it that way.

Have you finished recording the Santana reunion album?
I’m done with it unless Carlos wants me to play longer (laughs). We did it very organically. I brought in some songs and we went into a rehearsal space for a week and a half prior to recording. Then we both went on tour. When we came back, we went directly into the studio.

I love what I’m hearing. Carlos is still working on it, but what I can tell you is that it sounds like the original Santana. Carlos always sounds like Carlos no matter what. I love his playing. You can identify his guitar playing in two seconds, which is a feat in itself for any player.

Can we expect another Journey record in the near future?
We’re working on it.

Ode to the King of the Blues