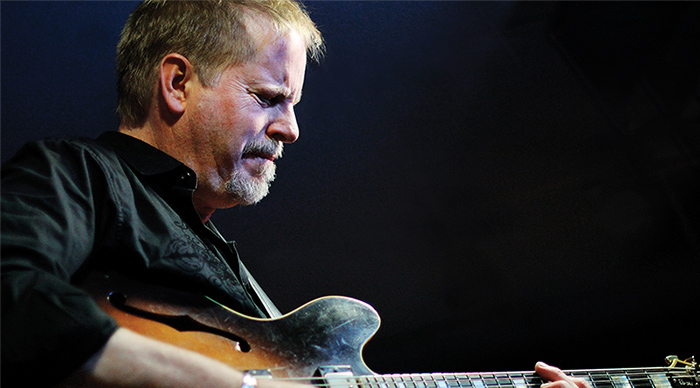 The latest project from jazz guitarist Dave Stryker, Messin’ With Mister T, is a tribute to late saxophonist Stanley Turrentine, with whom Stryker played for more than a decade.

A project long on his mind to do, Stryker said the success of his 2014 album, Eight Track, inspired him to follow with “something special.”

“I wanted to do Stanley’s music with my organ trio, and figured rather than one person on sax, why not call friends who dig him. Everybody was into it.”

Pulling together Jimmy Heath, Bob Mintzer, Chris Potter, and seven others wasn’t easy, but Stryker was able to get it done in a weekend.

Stryker recently produced an album by percussionist Steve Johns that features nifty guitar work from the producer and Bob Devos. It also features Johns’ wife, Debbie Keefe Johns, on sax, and his son, Daryl, on bass.

“Steve and I moved to New York City around the same time and have always played together. I’ve told him he had to make his own record; I gave him a nudge and he ran with it.”

Stryker has produced others, including the Charlie Apicella.

“I’m comfortable doing that,” he said of the role. “It’s fun to help somebody get their music out there in the best way possible.”

No matter the gig, not much changes for Stryker, equipment-wise. He mostly uses a Gibson ES-347, favoring D’Addario strings gauged .013 to .056. His amp of choice is a Fender Blues Deville with four 10″ speakers. He doesn’t use effects.

“I have a bunch of jazz boxes I pull out every once in a while – a nice Gibson L-5, a ’52 ES-350… I’m like all guitar players. You’ve got to be careful not to expand the collection too much.”

Stryker plans to bring the songs from his latest project to the stage. “I have a few different projects going,” he noted. “There’s Blue to the Bone, where we use a four-piece horn section. I’ve had a band for quite a while now with saxophonist Steve Slage. And, I’ve got the organ trio, which I’ve been doing a lot more with lately.

“You’ve got to have a different mindset for making money these days. When I first started, people were buying records. Now, people think everything is free. You need a way to negotiate the waters.”

Changes to the modern music world have affected musicians in other ways, too. “I was on Youtube one day, looking for stuff to celebrate Muddy Waters’ birthday. I have a tune called ‘Muddy Waters’ and was looking for a video of it. That’s when I noticed how many videos were out there of me playing live. In the old days, people would ask permission. Not anymore. Now, if you aren’t playing well some night, people are going to know!”