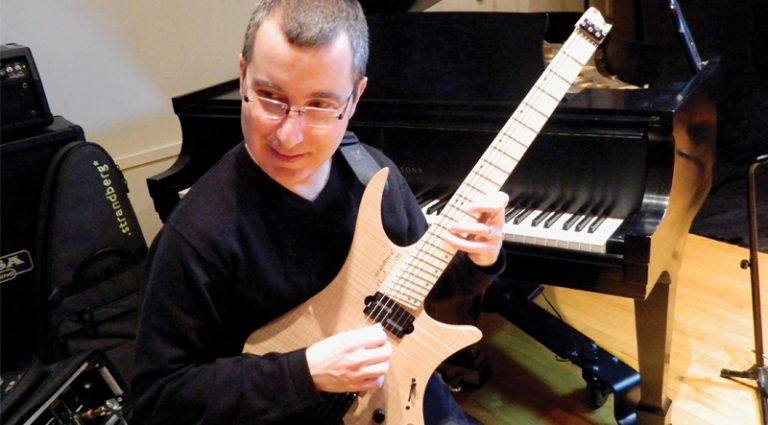 While guitarists have more platforms than ever when it’s time to showcase their music, rising above a sea of marketing-savvy musicians makes it difficult to gain recognition. Gustavo Assis-Brasil is an artist whose music deserves greater acknowledgment. His album, Chromatic Dialogues, is a refreshing vacation from rock and blues, offering a compelling sophistication, and erudite exploration of jazz guitar. His clever arrangements and composition blend jazz, prog, and classical concepts. We recently spoke with him to learn more.

What was your introduction to jazz?

Pat Metheny. Before that, I was into Vai and Malmsteen. Then a friend played me Metheny’s Secret Story, which is a live concert. I remember thinking, “What the hell is he doing?” For me it was like the connection between rock and jazz. For one or two years, I didn’t know what he was doing – I didn’t know modes, I didn’t know anything. When I was in college, I found out about modes.

Allan Holdsworth was the transition from shredding, because I was a rocker. For one entire year, I forced myself into Holdsworth. I remember the album – Atavachron. That was out of this world for me. There were guys like Wayne Krantz and Wes Montgomery, but my first jazz heroes were Metheny and Holdsworth.

Your undergraduate degree is in classical guitar.

I’m from Santa Maria, Brazil. They didn’t have an electric-guitar course, so I learned classical repertoire – Bach, Villa-Lobos, and Fernando Sor. I did this for five years. Then I spent a year studying so I could come to Berklee to learn jazz. When I was in Brazil I wasn’t playing Brazilian music, but I was surrounded by it.

Your compositions have a Brazilian sense of time. Do you think that’s subconscious?

It’s true. Santa Maria is in southern Brazil. It’s more Astor Piazzolla than Jobim. The music of southern Brazil is a natural part of me. Not so much samba or what you hear in Rio. Southern Brazil’s music is not for dancing. It’s music to be in front of a fireplace – more introspective. On Chromatic Dialogues, I wasn’t blocking anything. I let a lot of stuff happen. What is there is very natural.

How did the album come about?

The concept came into my head in a half an hour. I was taking a shower and all of a sudden I had the concept in my head. It was to have a quartet and have a conversation with the musicians. In-between the conversations, I would have actual songs. That’s why in the CD there’s dialogue. My idea was to have one piece of dialog between each song, but I just put everything together because I thought that was a better idea.

Some of the songs were old, but most of the album was this concept. For six months, I did pre-production and everything at home. I’m happy with the sound and the musical result. Usually, after I record something, a few years later I think, “Ah! Why did I do that?” (laughs)

You use a Fractal Audio Axe-Fx  preamp/modeler.

It took me a long time to program, but I had help. Javier Reyes and Tosin Abasi from Animals As Leaders sent me some patches. My main guitar is a production model Strandberg Bolden OS 6. It’s what I used for most of the tracks. I also used a Fender Eric Johnson Strat for the track “CC.” The Strandberg has a Seymour Duncan Jeff Beck pickup in the bridge and Seymour Duncan Jazz in the neck.

You managed to sound modern while upholding the jazz tradition.

One of the things I did was create a completely dry channel, and another completely wet. In the mix I used both, so it’s very organic-sounding. That was a big part of getting my tones. The Strandberg with the Axe-Fx was a very nice combination.

Yeah, I have three books – Hybrid Picking For Guitar, Single Note Permutations, and Hybrid Picking Lines And Licks. I never thought about writing a book until one of my students said, “You have so many handouts and you play with fingers and pick. Why don’t you write a book about it?” It’s me collecting things from my teaching. The hardest part was organizing the chapters. It’s exercises I wrote for myself. I play like a classical guitarist would normally play, but I have the advantage of having the pick, so I can do sweep picking and all those other things. I combine it into one thing without dropping my pick. The advantage is that I use my pinkie.

An album for solo guitar; I’m putting together new arrangements and compositions.