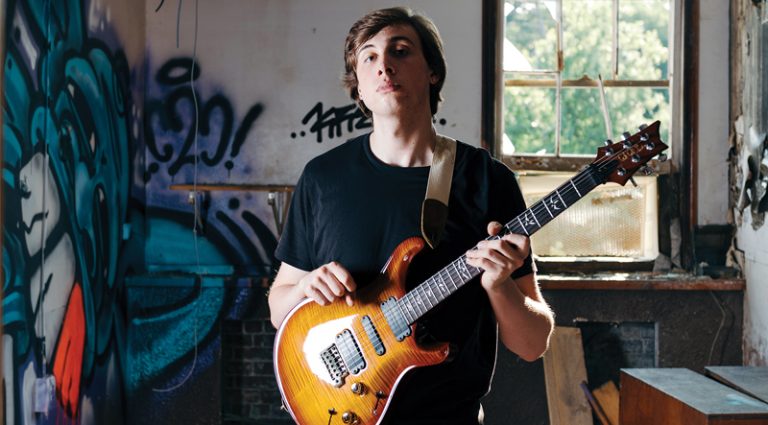 Jazz guitarist Ryan Carraher defines “vocturnal” as “a portmanteau of the words ‘nocturnal’ and ‘voyage.’ It’s a fitting title for his first album given that most of its songs were composed at night.

An intoxicating excursion through the harmonic undertow of contemporary jazz, it has a dark sophistication and melodic maturity that showcases the 23-year-old Berklee grad student. Thought jazz was dead? Not with Carraher so impressively carrying the torch.

You started in music as a rock guy. How did jazz find you?

Yeah, Van Halen was my big guitar hero. I took a bunch of lessons and was always interested in music, in general, not specific genres. During my junior year of high school I got into Allan Holdsworth. I never knew a guitar could sound that way; I don’t think I understood him fully when I was 12, but Holdsworth was the jazz gateway for me. From there, I got into all types of jazz, then other stuff followed when I was getting ready for Berklee. I never got into traditional jazz that much. I enjoy it, respect it, and play it a lot, but mainly, my listening diet is more modern, like Jonathan Kreisberg, Mike Moreno, and Kurt Rosenwinkel.

I’ve always been a music-theory nerd and always had a composer’s instinct. My main goal has always been to create new sounds. I’m trying to play what I hear. At Berklee, Alla Cohen inspired me so much to study composition. She really opened the door.

Many guitarists have strong ties to their influences, but you’ve been able to get beyond that at an early age.

I think about that a lot. People who cling to their influences… that’s how they were taught. Some teachers will put a player on a pedestal, and the student is taught to mimic that player. I never had the inclination to sound like anyone else; I was lucky enough to have an environment that echoed that inclination, and teachers that helped  along the way.

A teacher I had at The School Of Rock, Mike Mariano, never told me I had to play exactly like Van Halen. He was always declaratively open about the possibilities of music. He never tried to force what he thought was musically correct on me. He let me grow naturally. It took a while to find a teacher at Berklee that had that same mentality, so I studied with David Tronzo. He’s amazing – blows my mind with every lesson. He’ll listen to you play and tell you things that inspire you, and put you on a correct path to let you grow as you’re meant to.

How did Vocturnal evolve while you were at Berklee?

It was written over a three-year period, sporadically, because I had a lot of class work. “Valantis” was the first song I wrote for the record, at the beginning of my sophomore year. As I grew as a musician, I was inspired by different sounds and directions, and I was constantly questioning myself. Since then, I’ve been able to accept what comes out.

Working with teachers like David Tronzo and Alla Cohen helped me grow as a composer. I was being exposed to all this information and different ways of thinking about music and I wanted to respond with my own music. I did a lot of experimenting with arrangements. They grew as I grew, so I thought the album would be a good way to cap off my Berklee career. It was released a few months before I graduated. It’s a coming of age story (laughs).

What’s your gear of choice?

My main guitar is a Paul Reed Smith 513. It’s my child, at this point, and I used it for everything. For amps, I’m using a Fractal Audio Axe-Fx Ultra – the old, discontinued one. Live, I go direct through the mixing board. I use all the effects in the Axe-Fx and a Voodoo Lab Ground Control to control it. I also have an Electro-Harmonix POG2, which is my favorite pedal of all time. I use it on lead tones and chordal improv. There’s also an EarthQuaker Devices Rainbow Machine, which is another crazy pedal.

What are your plans for the near future?

I plan on continuing grad school while playing gigs. I’m working on a follow-up record; it’s a very big project and something I’ve wanted to do for a very long time. More on the modern/Avant side than Vocturnal. Hopefully, it will be done this year. I’m halfway through writing.