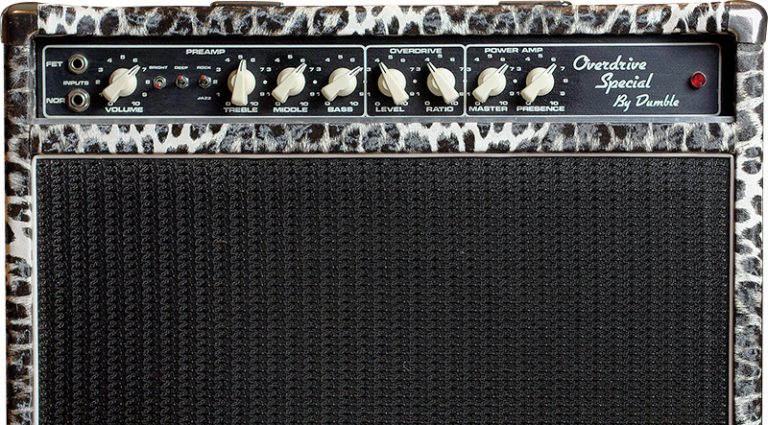 The exalted amps of Alexander Dumble have been legendary since he began building in the late ’60s, and have become more so over the course of the past decade, with several notable “boutique” makers launching their own lines on the backs of Dumble-inspired designs. It’s a rare thing, then, in the face of all this tone worship, to come across an original-owner Dumble, and to be privy to the full backstory of its acquisition.

With Dumble amps selling for several tens of thousands of dollars today, it seems utterly mindblowing to hear of the process of ordering, paying a price in the low four-figures, and receiving a custom amp a few months later. But, don’t blame owner/VG reader Chuck Matses – he was simply in the right place at the right time.

In 1972, Alexander Dumble was developing a reputation for making unusual tube amps in his home workshop in Santa Cruz, California, when he soldered together the first Overdrive Special. The model would remain his flagship through the years even as his Steel String Singer, Overdrive Reverb, Dumbleland, and a few other variations also ended up on major stages. Some people talk of the clean side of the Overdrive Special as having a “Fendery” signature, and, indeed, the first gain stage and tone stack have elements in common with the larger blackface amps, but it’s a highly evolved “Fendery” at the very least. And what they’re really known for, of course, is their overdrive – a high-gain tone produced by running the clean signal into a further gain stage (post-preamp) with its own Level and Ratio (blend) controls, rather than merely chaining together cascading preamp stages, as so many high-gain amps do.

In 1985, Dumble was interviewed by Dan Forte for Guitar Player magazine. “It’s a different kind of signal handling,” he said. “In the Overdrive, I approach gain levels that are extremely intense; within the linear region, I have a signal gain capability of one million. So if you stuck 10 microvolts in, you’d get 10 volts back. And I do it with stability, and it’s still very musical. The best way to approach an Overdrive is real slow. Walk up to it, look at the knobs, have it turned down real low, and then get a feeling for it. Learn what to do with your fingers to make it respond well. If you walk right up to it, it has a tendency to absolutely frighten some people. The secret control on the Overdrive’s panel section is the Ratio… which controls how much overdrive is fed back into the circuit. If you turn that up, it’s Rock City.”

Personality-wise – for most Dumbles, but the Overdrive Special in particular – think thick, creamy, chocolatey overdrive, singing sustain, an abundance of harmonic content, loads of texture and dimensional detail. Feel-wise, think über player-controllable dynamics, and an immediacy that lends a wired-to-your-fingertips playing experience. If you feed off the swampy compression of a laboring tweed amp, a Dumble is probably not for you. If you’re into raw and vintage tones more than the elevated and refined, probably not. But players such as Robben Ford, David Lindley, Larry Carlton, Eric Johnson, Stevie Ray Vaughan, John Mayer and Sonny Landreth have all made hay via the Dumble sound, so there’s clearly a little something to it.

As for the conception and birth of this particular amp, let’s have Matses tell the story.

“I have always been a huge fan of Jackson Browne and David Lindley. It was after hearing Dumble amps at close range – Rick Vito’s Dumble on Jackson’s Lawyers In Love album tour, and Lindley’s Dumbles with his El Rayo X group – that I wanted to own one. The tonal blast was from another world – at high volume, it seemed very three-dimensional and a bit difficult to describe with words.”

Floored by the experience, Matses went to the man himself and got the ball rolling. “In 1986, I sent Howard Dumble a letter of inquiry about ordering an Overdrive Special combo. A week or so later, the phone rang. My wife answered and said, ‘It’s Howard [as he was then known] Dumble on the phone.’ Well, we had a nice 30-minute chat about amps and music. I told him I was a big JB and DL fan. He liked that.”

Dumble sent Matses his order form, which the prospective client immediately filled out and returned with a bank check for payment in full: $2,150.

“I asked how long it would be until I received the amp, and he told me I’d have it in about five weeks. Well, I received it after what seemed like an endless five-month wait. After all the stories we’ve heard over the years, I guess I was lucky. Lindley told me that his rhythm guitarist from El Rayo X had to wait a year.”

For all of Dumble’s reputation for being gruff bordering on off-putting, Matses says he was friendly and easy to work with. The tube-amp guru offered to let his new client send his choice of covering for the combo, and when Matses suggested python-skin vinyl like Lindley’s amp, Dumble politely explained it couldn’t be done; that was an exclusive look reserved for the slide-guitar star. Instead, in a friend’s auto-upholstery shop, Matses located a leopard-skin material originally used for Arctic Cat snowmobile seats. He sent it to Dumble and, though Alexander had meanwhile gone to the trouble of securing David Lindley’s permission to use the python skin, client and maker decided they loved it, and the covering went on Matses combo, as well as several other Dumbles of the era.

“I received the amp via Federal Express in December of ’86,” Matses concludes. “I will never forget the sight of the driver opening the rear door of the truck, exposing the Anvil case with a special surprise inside. Over the years, it’s been a joy to play, as well as to just look at. The amp always sounds spectacular, and really shines in a band context.”

And that is how it all went down.