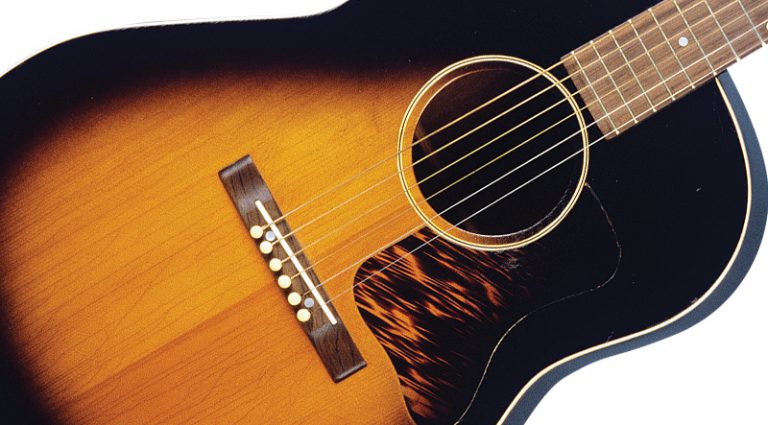 Dreadnought guitars originated as early as 1916 with instruments made by Martin and distributed by Ditson, followed in 1931 with guitars sold by Martin under its own brand.

The first Martin dreadnoughts were 12-fret slot-heads with an extended slope-shouldered body; in early ’34, the company introduced a square-shouldered dread with a 14-fret neck.

Gibson entered the flat-top market much later than Martin, but introduced a 14-fret dreadnought quite early; the HG-24 was marketed as a Hawaiian guitar, though it typically had a standard/round neck on its 16″-wide round-shouldered body with rosewood back and sides, round sound hole plus four f-shaped sound holes in the top, and an inner sidewall that did not meet the back of the guitar. It was part of a series of three (with the HG-20 and HG-22, which measured 14 ½” wide) guitars that shared body shapes with Gibson’s later jumbo dreadnoughts. HG guitars made from 1929 to ’33 are interesting instruments – especially the 24, with its oddball structural elements. But that’s beside our point here…

Introduced in 1934 and available only through ’35, Gibson’s Jumbo model had the 16″-wide, round-shouldered dreadnought body shape with mahogany neck, back, and sides, and nearly uniform body depth (4 ½” at its deepest), three non-scalloped tone bars between the X braces below the bridge, an unadorned rectangular bridge, bound top and back, rosewood fingerboard and bridge, 24 ¾” scale, dot fingerboard inlays, pearl Gibson peghead logo, and sunburst finish on the top, back, sides, and neck.

In ’36, Gibson followed with the J-35 (so-named due to its price – $35 – which was significantly more affordable than Martin’s closest equivalent, the D-18 at $65), which had a 16″ round-shouldered dreadnought body with mahogany neck, back, and sides, three non-scalloped tone bars between the X braces below the bridge, rectangular bridge with two pearl dots, single-bound top and back, 24¾” scale, silkscreened peghead logo, three-per-side tuners with plastic buttons, sunburst top, and dark-mahogany stain on the back and sides. Though budget-priced, the J-35 was a well-made instrument with lightweight construction, giving it a fine sound. Early J-35s have a so-called French heel with pointed tip, but by ’39, Gibson introduced a wider, more-rounded heel and offered the option of clear natural finish. By 1940, the top bracing was altered with two scalloped tone bars below the bridge. Production of the J-35 continued through ’43.

Another Gibson – the Advanced Jumbo – also went into production in 1936. A more-deluxe dread with rosewood back and sides, spruce top, and a rosewood bridge and fretboard, it sold new for $80 and is considered by many to be one of – if not the – finest Gibson flat-top. Made only through 1940 and in small numbers, today it is an exceptionally rare find.

The J-35 was manufactured in far greater quantity than any other pre-war Gibson dreadnought, with an average of 380 produced each year from 1937 to ’40. The following year, J-35 production surged to 855, which topped production for all other Gibson models with the exception of the V-25 violin. Though the J-35 was an inexpensive guitar when new – costing about half as much as a Martin D-18 – today, it is held in high regard by collectors and musicians, its desirability and superb sound due not only to woods, but the fact it was lightly built with thin top and light bracing, which gives great power as well as fine tone. An unfortunate side-effect of that construction is that any examples not treated with great care frequently fall into poor condition. Luckily, those that are properly maintained are inspiring guitars, and prove that an instrument’s list price is not always proportional to the quality of its sound or its desirability as a vintage model.