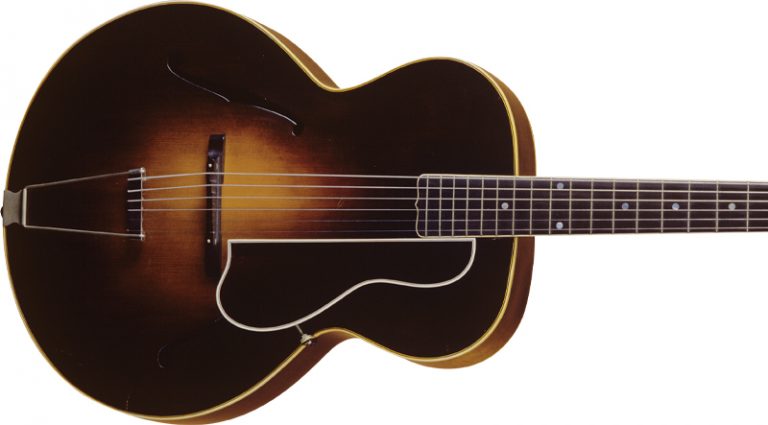 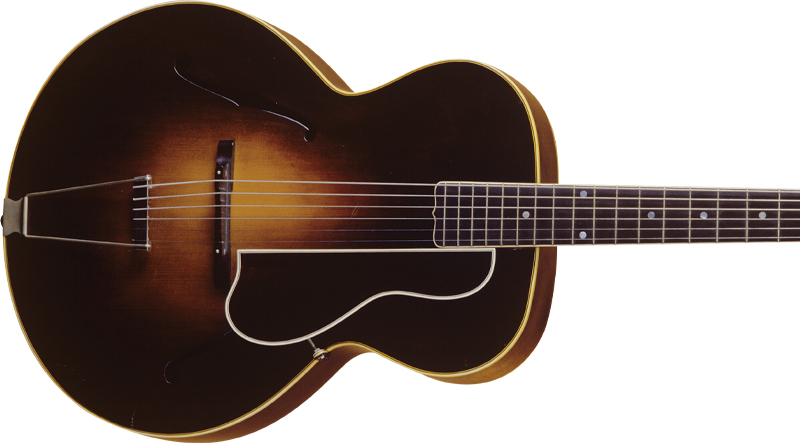 The Master Model instruments created at Gibson in the early 1920s are famous for their sound and build. Credit for their design is often laid at the feet of “acoustic engineer” Lloyd A. Loar, but recent study calls into question the role he played – and may even position him as a mere tool of the company’s marketing.

In its first 20 years, the Gibson company made numerous refinements to Orville Gibson’s original designs from the late 19th century. These included the violin-style arched back, smaller bodies with a slimmer profile, improved neck angle, and the elevated pickguard. By the time of the 1908 Fretted Instrument Guild of America convention in Washington, D.C., the instruments had seized popular imagination and catapulted the small company onto the world stage. In 1920, Gibson debuted the adjustable truss rod and adjustable-height bridge – ideas from factory superintendent Ted McHugh. Loar was hired in 1919, and in 1922/’23, the Master Model F-5 and L-5 debuted, both exhibiting further application of violin-building technique and design.

Though Loar is often credited with introducing f-shaped sound holes, parallel tone-bar bracing, and tuned air chambers, none of those ideas were new. In fact, several employees who pre-dated Loar’s tenure were hired because they had experience carving violin tops, and any of them could have suggested further application of violin construction. Loar was also strongly influenced by the Virzi Brothers – builders of violins, violas, bass viols, and the infamous Virzi Tone Producers; he encouraged the use of Tone Producers in Gibson instruments beginning in 1922. Additionally, the September ’24 issue of Music Trades Review contains a Gibson ad indicating the company was a distributor for Virzi violins.

Loar’s early training as a violinist certainly provided opportunity for outside influence. Furthermore, his renowned status may well have been a contrivance of Gibson’s flamboyant general manager, Lewis A. Williams, an original partner in the Gibson company. Williams (1878-1951) started with the company in 1902 as sales manager, and became general manager in ’17, following the death of Sylvo Reams. He was a gifted marketer who created the dense, flowery prose in early catalogs. One example in the 1921 catalog references the superiority of the harp-guitar over the regular guitar: “By the consent of all, he was fit to discriminate if he had not discriminated. The mighty Bach and his contemporaries could not be persuaded to leave the harpsichord with its inferior capacity and power of expression for the piano, yet where is the harpsichord today? Death alone saved Bach from ridicule of the then rising generation, for time and the piano proved Bach’s satisfaction and joys were but cheats that held him within narrow limits and belittled his gratifications by hedging his musical aspiration and inspiration with an instrument of but dwarfed compensation. Then, it was harpsichord versus piano; now it is guitar versus harp-guitar! Bach’s antiquated instrument is today but a museum curiosity and would remain such even if the mighty Bach himself were here to play it.”

Williams, a self-proclaimed “go-getter,” was responsible in large part for Gibson’s success in its first two decades of existence. A 1921 inventory shows his office contained many books, among them, Scientific Office Management, How to be Personally Efficient, and Reading Character at Sight. But even more telling are two other volumes – Violin Making, by Elias Howe and Violin Making, by Walter H. Mayson.

Loar’s connection to Gibson originated in 1906 when he purchased an F-3 mandolin for personal use. By 1911, he was a Gibson endorser, and by ’14 was occasionally performing as a member of The Gibsonians. His friendship with Williams likely dated to this period.

Following his return from Red Cross service in France during World War I, Loar was hired by Williams as the “acoustic engineer,” a title never before bestowed on a musical-instrument company employee – and one for which there was no credible scientific training at the time. In many ways, Loar was the perfect prop – a known performer and educator with an excellent reputation as an intellectual in the fretted-instrument community. After a grooming period, Loar was brought to further prominence through a series of academically-toned essays he authored for the company’s Sounding Board Salesman publication and public lectures around the country.

Though known as the“acoustic engineer,” the function did not consume much of his time. Factory documents reveal Williams had to find other jobs to keep Loar busy, including working at various times as credit manager, purchasing agent, repair manager, and production manager. As further evidence that Williams viewed Loar as a marketing tool, he was allowed to be absent from the factory during July and August each year, in order that he might tour. Also, an “experimental lab” was created for him in the northwest corner of the second floor of the factory. The ’21 inventory shows that it contained ordinary office furniture and hand tools. Loar also had time to dream up his 10-string mando-viola, an unusual instrument Gibson evidently declined to place into production. Even the signing and dating of the famous Master Model labels (another brilliant marketing idea) was done in quantity then installed as needed, as evidenced by the fact they appear in an out-of-date-order sequence compared to serial numbers, as well as the fact only 34 signing dates appear on the labels covering the 300 total Master Model instruments.

Loar’s obituary in Fretted Instrument News magazine provides insight to the way he was viewed by contemporaries. It describes him as a quiet man, classically trained musician, concert artist, and educator. His tenure at Gibson is briefly mentioned but without reference to the Master Model instruments. His accomplishments as a violinist are included, but there’s no reference to the mandolin. To date, no known recordings have surfaced with Loar as performer, and the obit indicates he was simply a well-liked and capable classical musician. Many of his published writings from the ’20s are a strange mix of science and conjecture. In fact, during Loar’s active career, the technology to scientifically describe and study acoustics was still decades in the future.

The obituary is also a clue to the disastrous original response to the Master Models. First was the F-5 mandolin, which was not well-received because the popularity of mandolin music had evaporated several years earlier, and by standards of the day it was incredibly expensive – originally $200, then quickly $250. The H-5 mandola and K-5 mando-cello failed for the same reason. The original L-5 guitar design, introduced in ’23, did not find much market acceptance, either, likely because the music for which it was most suited was still some years in the future. While the original is an instrument of superb quality, today, most musicians prefer an L-5 made after 1935, with the larger (17″) body, flashier inlays, and binding.

Many Master Model instruments were sent to teacher-agents on speculation and returned years later after having not been sold; Gibson was still shipping new-old-stock Loar-era instruments with his “signature label” as late as 1926. The failure of the Master Models to recoup development and production costs was likely an important factor in the 1923 dismissal of Williams, who had proven unable to see the end of public interest in the mandolin, and perhaps unwilling to change course.

A great deal of speculation surrounds Lloyd’s departure from Gibson in December, 1924. There is nothing in the minutes from meetings of the board of directors to indicate strong disagreement. In fact, over his five years with the company, Loar is hardly mentioned. Evidence suggests he left quietly, and nobody really cared.

Williams’ departure was followed by the hiring of Harry Ferris as general manager in 1923. He was fired in ’24. At the time, the company was dedicating more resources to banjo production, so the value of Loar’s presence ended with Williams. Loar’s attitude may have soured or he simply saw no reason to remain with Gibson.

Loar went on to a successful academic career, registered 20 patents, experimented with electric pickups and, in 1933 formed the ill-fated Vivi-Tone Company with Williams. But, for a man believed to have reached such great heights of creative genius in 1922, he was never able to replicate the process. His designs at Vivi-Tone were unusual, but proved an evolutionary dead-end, and it’s difficult to reconcile those instruments with the wonderfully conceived and executed Master Models. Indeed, based on design and workmanship, it’s almost impossible to believe the same man was responsible for both. Design credit is difficult to prove; though often included in patent applications, it is sparse in Gibson records.