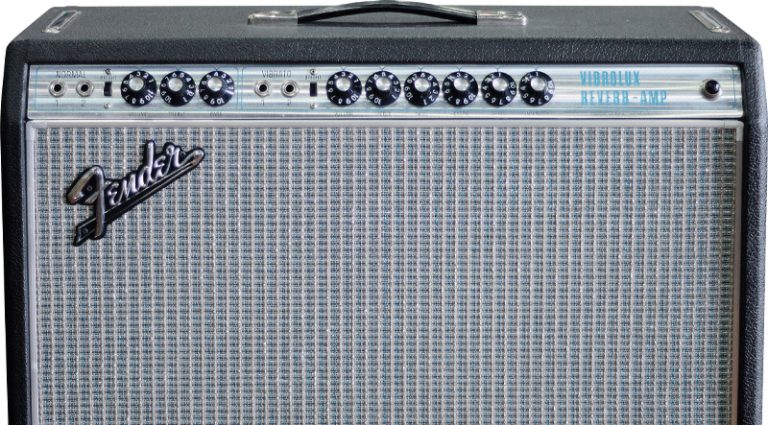 Amplifier collectors swarm to models with descriptors like “first year” and “golden age,” but other types can be far more interesting; a transitional model or amp from a short-lived evolutionary crossroads – especially in “mint” condition – is enough to send goosebumps up the flesh. Such is the case with this one.

Other than a smudge at the bottom of the front edge of its cabinet, this amp is nearly as clean as it was the day a Fender rep walked it through a dealer’s door to replace the outgoing “blackface” line. So clean, in fact, that when Hal Hawkins saw it in his local music store, Martin Music Guitar, Memphis, he assumed it was the late-model reissue Fender calls the ’68 Custom Vibrolux Reverb.

“But when I saw the speakers, I knew it was not a reissue,” Hawkins said. “The store owner told me it had just been brought in by a guy from Arizona who got it from his next-door neighbor. It had been in a closet, with no cover, since he bought it new in ’68.”

The amp’s immaculate state carries through to the inside of the chassis, where it’s distinguished by a remarkable absence of dust bunnies, cobwebs, spider carcasses, or even mild pitting/corrosion (thanks, dry climate!).

Of course, any rabid excitement over this amp is justified by far more than its unsullied condition. The Vibrolux Reverb, whether blackface or silverface, has long been regarded as one of Fender’s greatest utility amps, and many players hail it as the best and most versatile grab-and-go combo ever produced. Several factors support this argument, and certainly given the ratio of portability to features – with an addendum to note the difficulty of getting many of Fender’s bigger combos to behave adequately on today’s quieter stages – the Vibrolux Reverb is definitely a contender for the crown.

Among those desirable features are:

• A pair of Oxford 10L5 speakers, attaining the magical articulation of Fender amps of this era when translated through 10″ speakers

• A smaller output transformer than that of the Super Reverb, for example, yielding just 35 watts and an earlier onset of distortion

• A GZ34 tube rectifier for a stout immediacy, yet appealing dynamics, in the playing feel.

With all of these attributes, the Vibrolux Reverb still weighs only an extremely manageable 40 pounds, just three pounds more than a stock Deluxe Reverb of the same era, even though it carries a lot more firepower. Rein in the volume and the combo exudes what many guitarists, whether Fender fans or otherwise, would agree is one of music’s archetypal clean-with-character electric guitar tones, yet it will do so with enough volume to compete with most reasonable drummers. Push it a little harder, and it eases into rich, dynamic, somewhat glassy overdrive that could be characterized as “mini-SRV” – a more containable rendition of Stevie Ray Vaughan’s delectably scooped, wiry, stinging Fender-on-Fender tone. Add a Tube Screamer or other midrange-enhancing/medium-gain overdrive pedal, and it’s rock and roll incarnate at aurally acceptable volumes.

As for this particular ’68, well, its owner’s thoughts on tone and performance tend to echo the consensus with some adjustment for the relatively unplayed condition.

“I have a ’66 Deluxe Reverb that has always been home base for me,” Hawkins said. “I like to say, ‘If you can’t get a good tone out of an old Deluxe, you need to take up the violin.’ I would say the Vibrolux has a similar sound, but it can stay clean at a louder volume. That’s obvious, of course, but very true. And this one just sounds tight and focused no matter what guitar I play through it. I really don’t think it had been played for more than a few hours before I got it.”

The Vibrolux Reverb model came into being in mid 1964 as part of the second wave of blackface models, et al, the first wave of which had arrived in late ’63 and early ’64. As with many of the new reverb-equipped Fenders, it replaced the short-lived reverb-less blackface 1×12″ combo version of late ’63/early ’64 (if any ’64s actually exist), but the speaker complement was really more like a junior-sized 4×10″ Super Reverb. Like most mid-sized Fenders of the era, the Vibrolux Reverb had two channels with just Volume, Treble, and Bass on the Normal channel and the same on the Vibrato channel, plus controls for Reverb, and tremolo Speed and Intensity.

The model evolved through minor circuit changes until the far more obvious change-up of ’68, when post-CBS Fender introduced its flashy silver control panel. For just about one year of production, this new styling was accompanied by a gussied-up speaker grille rimmed with a silver metal strip – the “drip-edge” that was gone early in 1969. A simple feature, and likely one determined by CBS-owned Fender to be an unnecessary expense, this ridged “frame” around the grille denotes the first and most desirable issue of silverface amps. Also desirable is the fact that many drip-edge models were given few, if any, of the circuit changes seen in later silverface amps, and carried circuits that were blessedly close to their hallowed blackface predecessors.

This amp does, however, display a mixture of latter blackface and early silverface circuit topologies, including 2,000-pF disc capacitors on the grids of the 6L6 tubes, large 150-ohm resistors tied between the 6L6s’ cathodes and ground, and the bias-balance circuit that replaced the earlier bias adjustment. These can easily be changed to full blackface specs, though plenty of players enjoy the slightly firmer, tighter performance that silverface specs often induce. But for the full “good as new” experience with this uncommonly shiny ’68, hell… just plug in and play the thing!