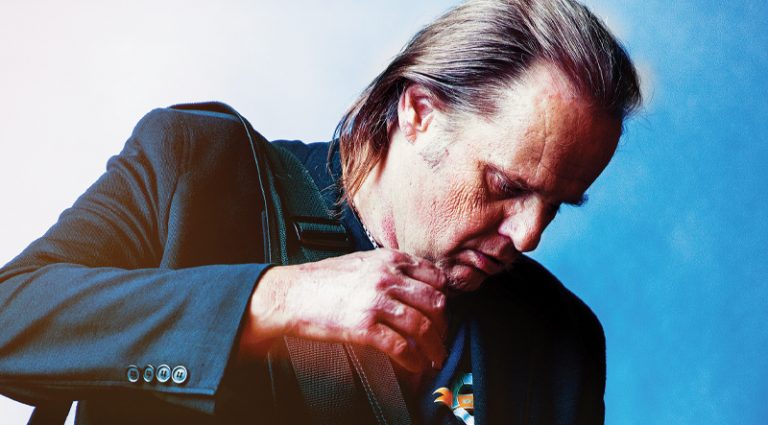 After having his life saved by a liver transplant and releasing Battle Scars, an album that chronicled his health struggles, Walter Trout is back. To celebrate, he gathered friends including Joe Bonamassa, Warren Haynes, and Kenny Wayne Shepherd to record We’re All in This Together.

How did the guest list develop for the album?

Battle Scars was a concept album about my brush with death, the eight-month stay in a hospital, and fight to recover. It was very heavy, and pretty graphic. After that, I thought, “I’ve recovered. I feel great. I’m filled with energy and creativity, and I feel young again. Instead of doing some other deep, emotional, confessional record, how about we have some fun?”

It started when I did Carnegie Hall with Kenny Wayne and Edgar Winter, and we were sitting in the dressing room and I said, “Why don’t we record together?” Later, I had dinner with Warren and Robben Ford, and we were sitting, telling stories. I said, “I’d love to record with you guys.” So, it kept transpiring until I had this group of friends who were ready. I wanted something fun and radically different.

Did you get to spend time in the studio with any of them, or were their parts sent digitally?

Those who came in to record with us were Joe Bonamassa on the title track – which by the way, was one take, spontaneous… we didn’t even rehearse it – Edgar Winter on “She Steals My Heart Away,” and my son, Jon, on “Do You Still See Me at All?” The rest were mapped out and planned in advance in regard to who was going to play what and who was going to sing where. We did the basic tracks and we sent them out to the guys.

What were some of your favorite moments in the process?

I have to say there are a lot of blues jams, which I love. But as far as songwriting, I really like the cut with Mike Zito, “She Listens to The Blackbird Sing,” and I like the cut with Edgar, because they’re different than the rest of the stuff on there. I also like the cut I did with John Mayall, “Blues for Jimmy T.” Mayall came to the studio, too.

Which guitars, amps, and effects did you use?

I basically used my road rig, which is this mutt Stratocaster. The body was built for me by Scott Lentz. About 12 years ago, my shoulder went out because my old ’73 Strat weighs more than a Les Paul – it’s the one on the cover of all my records. And it pulled my shoulder out to where I couldn’t even control my left arm, I got a lot of physical therapy and a lot of acupuncture. The arm came back, but I had to retire the guitar. So Scott, who’s a good friend, built me a body that is incredibly light – I’ve got the lightest Strat on the face of the earth! I don’t know what wood he used. I had a couple of Strats laying around, and there was one neck that I really liked, so I put that neck on it. The pickups were made for me by my close friend, Seymour Duncan. And I’m just playing through a Mesa Boogie Mark V with a 4×12 open-back cabinet – the kind they don’t make anymore with the black-metal grille.

I’m not using any pedals or any effects – I go straight into the amp. But I am on the third channel, with the gain turned all the way up. If I want to play clean, I just turn the guitar down. I do all of it with the Volume knob on the guitar. I came up in the ’60s and early ’70s, playing in a lot of bar bands, and the only thing that was miked was the vocals. So, you had to control the balance with your instrument and learn how to play rhythm parts with the guitar turned way down. When it was time for a solo, you cranked the guitar up. It’s an old-school way of approaching it.

How is your health?

I feel great. I’m filled with energy and creativity. I feel like I could sit down today and write you an album if I felt like it. I’m kind of reborn.