We dig old Valco-made amps wearing Supro, National, Airline, Oahu, Bronson and other badges for the way they deliver a sweetly burnished, chocolatey overdrive at studio-friendly levels when you inject a six-string electric and crank them up. Back in the day, though, Hawaiian lap-steel was the Valco company’s real bread and butter, and this Chicago manufacturer disseminated its student steel “sets” to a lot of jobbers.

You’ve got to admire the cheekiness of the marketeer who decided to label this little cutie “El Grande”; considering that for size alone you’d think it was some kind of in-joke, though chances are the name just invoked the kind of Southwestern ambience the retailer was seeking. Judged purely for sonic girth, however, El Grande is right on the mark. The primitive single-ended design might deliver but a modest five watts, but it does so with all the chewy harmonic dimension and gritty, reedy texture that has made a legend of this 60-year-old circuit.

As far as we can discern – with input from this amp’s owner, Brad Schultz, and inquiries with Terry Dobbs (a.k.a. “Mr. Valco”) as well as David Barnes of Vintage 47 Amps – the El Grande was manufactured by Valco from 1951 to ’53 to be sold as partner to an entry level, wood-bodied lap-steel guitar of the same name, which also shared the appealing deep-red color found in the outer element of the amp’s two-tone scheme. The usual searches uncover a handful of examples of the steels and amps out there, but no solid information on who marketed the set in the first place.

“I’ve had several of those El Grande amps along the way,” says Dobbs, a long-time Valco repairman and collector. “All of them were the single-ended 510-11 Supro Spectator [design] with burgundy-and-white covering. Not much info is available on the El Grande amps and lap steels, but I would think some music store contracted Valco to make them… or possibly they were sold door-to-door and to schools for their music classes, like Oahu, Bronson, Dickerson, and other Valco-made jobber amps and lap steels were in the late ’40s and early ’50s, when lap steel was very popular.”

Regardless of the lack of history, this amp’s Valco origins call out loud and clear from the labeling on the rear control panel and other telltale features, and just as Dobbs tells us, a look inside reveals the same Model 510-11 circuit as found in the more common Supro Spectator and other amps of the same specifications. Though as mentioned above, Valco provided amps made to the exact same electrical design to several different retailers, there’s something cool about unearthing a unique new variable in the cosmetics, and the El Grande’s looks and name make it a real sweetheart – and that’s got to help it sound just a little bit better than the average Supro sporting the same innards, right? Or at least it can’t hurt to tell yourself that when you plug in.

The meat and bone of this El Grande coalesce around a single 6SL7 preamp tube and a single 6V6 output tube, with a 5Y3 for rectifier duties. Roughly speaking, the octal-based 6SL7 has specs that are broadly similar to a nine-pin 12AX7, but it presents a somewhat thicker, juicier tone, and that’s a big part of what gives these single-ended Valcos of the early ’50s their distinctive character. Of the three inputs – two labeled “Instr” and one “Microphone” – the latter is the hotter, lacking the 100k grid-stopper resistor that the others have between their hot contact and the input grid of the first gain stage of the 6SL7. After hitting the Volume control and a simple treble-bleed Tone control, the signal hits the second half of the 6SL7, which acts as a driver to shoot it onward to the 6V6. Going via that Microphone input, your guitar sees just two .05µF coupling caps and two variable resistors in the form of the volume and tone pots, and nothing but tubes and transformer otherwise. It doesn’t get much simpler and purer than that. As you can see from the internal photo, the two (leaky) original coupling caps have been replaced with newer orange-drops, and there are some new power resistors on the connections to the top of the multi-section can cap (the color-striped/cream-colored resistors toward the center of the chassis), as well as a new three-prong AC cord added for safety, but this El Grande is otherwise original, and sounding just as it should. 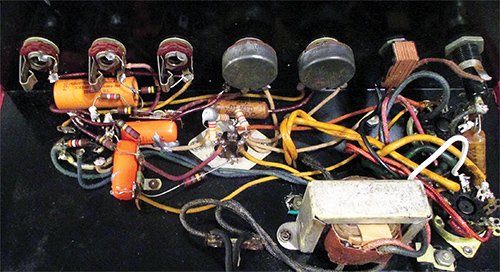 “The amp has an appealing, reedy sound when cranked, which is much different than amps with a 12AX7 in the preamp,” said Schultz. “It breaks up, but does not get fuzzy and ill-defined. I would call it a controlled breakup. However, if you goose the front end with a boost pedal, it can roar. It’s a great, great blues sound.”

Given these qualities, the El Grande – like other renditions of this single-ended Valco circuit – makes a superb recording amp, but you can also mic it up and feed it through the sound support system to gig it at any volume. The 6SL7 preamp tube that’s central to its sound is not as plentiful as it once was, but still easy enough to find, and modern equivalents are also available. The most desirable new-old-stock (NOS) renditions that have caught on with tube-audio enthusiasts can fetch prices into the three figures, but you can still easily find good NOS types for $25 to $40 or so, and you only need one to keep this little beauty sounding sweet.