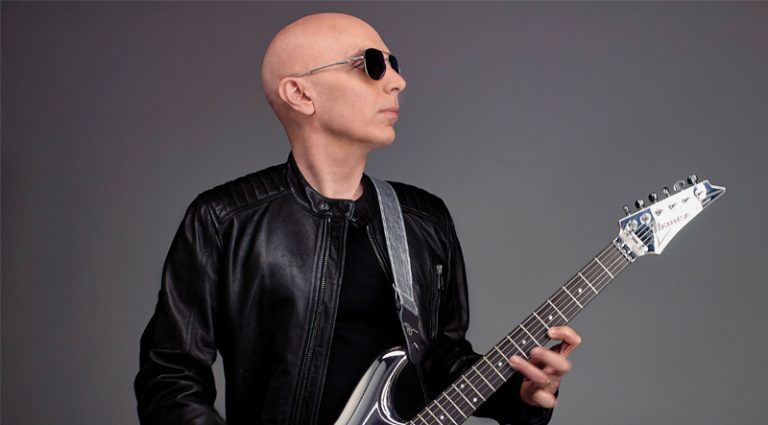 Joe Satriani’s new album, What Happens Next, is a terrific back-to-basics effort with Satch in a trio format. Enlisting Red Hot Chili Peppers drummer Chad Smith and former Deep Purple singer/bassist Glenn Hughes, he employs soaring melodies elevated by the strong musical personalities and chemistry. He has also released a tour documentary directed by his son, ZZ, oversees his G4 Experience guitar camp, and another G3 tour is in the works featuring Def Leppard’s Phil Collen.

How did you find time to write songs for a new album?

I wake up slightly nervous every day when I’m going to write a song; that’s where the energy usually comes from. I’m sitting with an instrument, thinking, ‘What do I feel strongly about, and what would it sound like if I had to communicate it to somebody through music?’

Did you change anything in your approach to making the album?

I wanted to use fewer moving parts, and arrangements focused on the energy between Chad, Glenn, and me, and our performance in the studio, rather than getting super clever with production. That helped me focus on the writing.

Halfway through my last tour were two Chickenfoot gigs (with Sammy Hagar, bassist Michael Anthony, and Smith on drums), and I was reminded of what a crazy and fun band that is. I kept thinking, “Wow, that’s what happens when a drummer and guitarist are looking at each other, trying to figure out where everybody’s going.” It makes a great show and there’s so much that gets created. It popped into my head that it could be a foundation, and Glenn’s name came up right away because he’s such a great rock-soul singer. And his playing is like his voice – there’s no separation between the singer, the performer, and the bass player. He’s just so musical. Once I happened on that, I sent a message to Chad: “You, me, and Glenn. All I need is 10 days in the studio.” Glenn thought it was the craziest thing ever because no one had ever asked him to play bass on a record and not sing.

People forget what a great bass player he is.

Exactly. In every take there was so much wonderful stuff – even the scat singing. I got some of those scat melodies down because I reminded him that he was singing between my guitar notes. I asked him to play it and of course he could play it on bass right away.

What sort of gear did you use on this record?

Part of the charm was to say, “I’m going to play what’s making me expressive and hand over the really hard work to [producer] Mike Fraser.” I wanted to use guitars that were friendly to my hands. We had 15 Marshall heads – some vintage, some brand new like my signature heads. We had some new heads like my Mezzabarba and a couple of my old Fenders. I think I used five guitars and maybe 10 amps, tops. One thing that makes a session drag on is when you’re searching and searching for a sound, then before you know it, you’ve lost the idea or your enthusiasm.

You’re in the prototype stage on a couple new Ibanez guitars, right?

Yes. One is an alder body we’ll finish in a new Muscle Car Red. It also has a new Satriani pickup from DiMarzio and comes stock with a Sustainiac in the neck position. I wound up using my orange and purple versions of the same guitar. Also, my black 2014 guitar outfitted with the same pickups.

Phil Collen is going to be part of the next G3 Tour.

Phil is a real virtuoso player and most people are unaware of the depth of his ability. He’s an exciting performer. To do what he does takes a high degree of musicianship and a love of professionalism. G3 is a tour, so we have to show up every night and give 100 percent. You can’t have people who don’t embrace that. What I didn’t know was that he was going to play faster than me (laughs). People will be pleasantly surprised. They’ll be overwhelmed with how good he is, and he’s a great singer, as well. It’s going to make the whole evening very special.