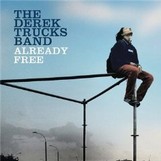 Derek Trucks is one of the top guitarists of his generation. He has helped write a new chapter in the history of the Allman Brothers Band, was an integral part of Eric Clapton’s last touring band, and with his own band’s sixth record proves he has the ability to make consistently interesting and wonderful music.

Like all of Trucks’ music, Already Free covers lots of bases, but soul dominates. “Days Is Almost Gone” has a strong hook, a rhythm that doesn’t let up, and a slide solo that’s warm and friendly, beautifully complementing Mike Mattison’s vocal. A cover of the soul classic, “Sweet Inspiration” is right on the money and the very-southern old-school funk and soul of “Don’t Miss Me” is instant dance-floor heaven.

While soul is prevalent, there’s plenty of other stuff. “Our Love” is the sort of anthemic acoustic song that former ABB guitarist Dickey Betts has done so well in the past, and Trucks’ slide solo is dead-on in terms of notes and emotion. “Get What You Deserve” is a bluesy boogie of the first order. And “Something to Make You Happy” is a rock/soul stomper with a solo full of big, biting, nasty tone.

Trucks’ wonderful band is joined by his very talented wife, Susan Tedeschi, on one cut, and Allman pals Warren Haynes and Oteil Burbridge are present, as is Doyle Bramhall II.

It’s hard to believe Trucks will only turn 30 this year. Anyone whose playing is so eclectic, soulful, and technically satisfying should have a long career behind him. In this case, it’s ahead of him.