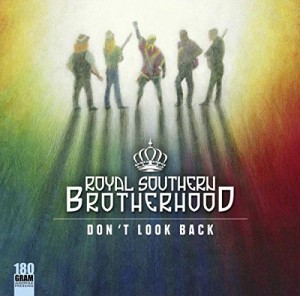 Royal Southern Brotherhood has a different guitar lineup, but the sound of the band – which incorporates pretty much anything you can think of on the American music scene – still remains pretty much perfect.

Devon Allman and Rick Zito were charter members, but the guitar work now is handled by Bart Walker and Tyrone Vaughan – yes, Jimmie’s son. Like most everyone in the band, they’re well-rounded musicians proficient at lots of styles. But the blues is never far away.

Cyril Neville handles a good portion of the songwriting and singing, although not all of it, as the band appears to be a well-oiled democracy. Funk is king on “Hit Me Once” and “The Big Greasy” with the rhythm section of bassist Charlie Wooten and drummer Yonrico Scott mixing it up well with the guitarists and guest keyboardist Ivan Neville.

Riff-driven rock is at the forefront of “Hard Blues” and “I Wanna Be Free.” Both songs give the guitar players room to stretch out and show the listeners what they’ve got.

A shout out should be given to Fame Studios in Muscle Shoals: That’s where the Brotherhood recorded a nearly flawless record full of American music.

The Slambovian Circus of Dreams