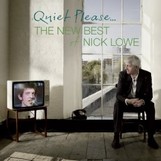 Like his longtime associate (as both producer and producee) Elvis Costello, Nick Lowe may have come onto the scene via punk rock, but soon proved he was much more. In hindsight, Costello’s initial punk stance seems more sincere and ardent, as illustrated by their contrasting versions of Lowe’s anthemic “(What’s So Funny ‘Bout) Peace, Love And Understanding.” Even in its original 1974 rendition by pub rockers Brinsley Schwarz, Lowe seems reflective while Costello is in your face.

And while Costello proved his versatility and eclecticism by releasing a country record, a soul album, a lounge set, and a classical CD, Lowe’s many sides revealed themselves more organically, homages to his influences subtly seeping into his body of work.

That body of work is re-examined in this two-CD, one-DVD set, spanning 33 years, and to say it’s impressive would be a gross understatement.

Actually, the collection focuses on only one side of Lowe’s body of work, his songwriting. In the liner notes, producer Greg Geller explains that this represents (and admittedly subjectively) only Lowe’s originals, while bemoaning the absence of some of Nick’s choice covers, like Dallas Frazier and Doddle Owens’ “True Love Travels On A Gravel Road.” (A second collection, Yep Roc. Please.)

But it’s hard to argue with the 49 choices here – from “Without Love,” a country shuffle worthy of (and covered by) Johnny Cash to the Cajun drone of “Wishing Well”; from his catchy 1979 hit “Cruel To Be Kind” to the Doug Sahm Tex-Mex of “Half A Boy And Half A Man” and the rockabilly rave “I Knew The Bride (When She Used To Rock And Roll),” featuring Huey Lewis & The News.

A plethora of guitar greats pepper the overview. In addition to Cooder and Brinsley’s Martin Belmont, Rockpile’s Dave Edmunds shows up repeatedly (sometimes as producer), as does the quartet’s Billy Bremner (on “Without Love”). On more recent work, Steve Donnelly is featured, and the King Of Dieselbilly, Bill Kirchen, shines on 1994’s The Impossible Bird.

The deluxe version of this package includes a DVD featuring nine song videos and 17 tunes from a 2007 concert in Belgium. Not essential, but they help complete the portrait of this formidable artist.