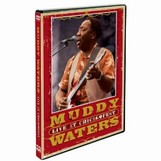 Filmed in Chicago in 1981, this video captures Muddy with a band featuring Mojo Buford on harp, guitarists John Primer and Rick Kreher, pianist Lovie Lee, bassist Earnest Johnson, and drummer Ray Allison. And while it isn’t the finest Muddy video, is anything with Muddy really bad?

The band treats a loving crowd to a set of the classics, opening with “Mannish Boy” – which you’d think he’d save for an encore, but instead makes a bold opening statement. Muddy’s in fine voice and plays the crowd beautifully, doing a dance in the middle. He straps on his Tele for a couple of cuts, including an incendiary version of “They Call Me Muddy Waters” which features a nasty Muddy solo that splits the song wide open. Primer has the unfortunate task of following that solo, but proves up to it. Johnny Winter pops onstage for the final third of the concert, and despite some technical difficulties he fits in perfectly even if his blustery solo on “Going Down Slow” is a bit out of place. Later, Mighty Joe Young and Big Twist pay tribute to Muddy before the set ends with a stomping rendition of “Got My Mojo Working.”

Again, it’s not a perfect DVD. There are some sound problems and a brief bit of discoloration on the video during one of the songs, and at times the band seems uninspired. Nonetheless, this is an enjoyable work of art.

This article originally appeared in VG‘s Jul. ’09 issue. All copyrights are by the author and Vintage Guitar magazine. Unauthorized replication or use is strictly prohibited.