For years, Bob Taylor fended off the question, “When are you going to build a solidbody guitar?” Well-known as a builder of top-notch acoustics, for his company, Taylor Guitars, the step seemed logical and maybe even a little overdue. And when Taylor released the semi-acoustic T5 three years ago, it was greeted by many as a tantalizing hint. But again, “When?”

“When we have something to offer…” was Bob’s oft-repeated reply.

Then, as part of the general process of exploration and experimentation that goes on at the company, longtime employee David Hosler devised a new pickup. Instead of dropping it in yet another Strat or Les Paul clone, Hosler and Bob Taylor agreed the new pickup demanded a new guitar.

What they came up with is the SolidBody series with variations dubbed Classic, Custom, and Standard. All are flat-front/single-cutaway guitars with two pickups, a standard Taylor C-shaped neck (the same used on their acoustics), a 247/8″ scale, and a nut that measures 111/16″ wide.

The Classic’s neck is maple with a rosewood fingerboard, while the Custom and Standard sport necks of sapele with ebony fretboards. All use Taylor’s sealed tuners, and the very flat 15″ radius fretboard has 22 medium frets. The neck is attached with Taylor’s proprietary T-Lock system, where an Allen bolt goes through the body and pulls the neck into a pocket shaped like a W. The light-gauge (0.10-0.46″) Elixir strings end at the aluminum bridge, which is, like the pickups, a new design. There are only two control knobs – one for volume, the other for tone – and the five-way selector switch manipulates an interesting pickup-wiring configuration.

The bridge common to all three is cast aluminum with an art deco appearance designed to remain free of sharp edges. Individual bridge saddles are adjustable and can be locked down through a plate in the back of the guitar. That means the strings can be replaced without having the saddles move at all.

The T-Lock neck system is so tight that, viewed from any angle but the back, the neck appears to be glued in. This system eliminates the need for a neck heel, which greatly improves feel, as well as access to the upper frets.

The basic shape of the Taylor solidbodies is captivating, and they are also extremely comfortable to hold and play. The neck has a “three bears” quality – it’s not too thick, not too thin… this one is just right. The fret ends are perfect and the action suspiciously low for a neck with almost no relief. The bevels on both sides of the cutaway encourage exploration of tones in the upper register, and the contour at the top of the back will come as a relief during long practice and recording sessions while seated.

Sonically, the five-way blade switch in position one on the Classic (least expensive of the group) offers a warm, jazzy tone with just a little more treble edge than a traditional humbucker. Dialing up a mild overdrive from a tube amp, the neck pickup gives off a deep, throaty growl with a hint of that magic steel-on-glass tone of a great Stratocaster-type pickup. In position two, the Classic solves that age-old problem of adjusting for too much low-end when you go from lead to rhythm. Its open, airy sound is still distinctly electric, but won’t muddy up the mix.

The central position adds midrange and lower-mids, offering a deeper, more forceful rhythm sound that is still unobtrusive. Skipping to position five (both coils in the bridge pickup) dishes out a tone very reminiscent of a Telecaster, though not quite as bright or with the same edge.

Backing up a notch to position four takes the tone of the bridge-only spot on the blade and boosts it with lower-mids and adds just a hint of cluck; in other words, a great lead tone.

With the switch in position one, the Custom introduces a number of pleasing acoustic-type overtones. However, when pushed hard, it still gives up a beautiful growl. In position two, it has a warm, almost muted jazz tone. Surprisingly, the cluck of the Classic is totally absent!

In position three, lower-mids are reintroduced; this position works excellently for leads or as a standard-sounding humbucker rhythm. Skipping again to position five, the Custom gives off a Telecaster tone like the Classic, but unlike the Classic, the treble from the Custom is a little sharper and more defined. Position four beefs up the position five tone with added low-mids and a much more aggressive attack.

Taylor says the optional koa top on the Custom is simply a cosmetic choice, but with it the guitar has a slightly brighter and cleaner tone. Particularly in position two, it makes a bit more of the cluck found in the Classic. In position five, it has more jangle, with a brighter (but still very smooth) high-end response. In position four, it offers just slightly less midrange and low-mid frequencies.

The Standard has the traditional-sized humbuckers and produces more overall output than the Classic or Custom. The neck pickup alone (position one) offers some of the prettiest tones of any humbucker. Think Gary Moore, but with a little more air and treble definition.

Low-end and lower-mids are reduced considerably in position two, just like with the Classic and the Custom, but the tone is fuller with much more upper-mid tones than the other two instruments. Hitting position three gets a very full humbucker tone with a bit of acoustic zing on the top.

Position five on the Standard offers a bright humbucker sound with a little jangle and no nasal congestion. Pushed, the pickup can have a very hard but useful edge, which is not a bad thing when playing harder rock and even (dare it be said?) metal. Come back a notch and the clear, strong treble of the bridge pickup remains but the lower mids come in to give it a deeper attack.

If your single-coil guitar is just a little too bright or thin-sounding, or if your humbuckers don’t offer the definition and treble you’d like, Taylor SolidBody guitars might be the answer for you. Or maybe you just don’t want to yet another guitarist with a Strat or Les Paul. In that case, Taylor might be able help you adjust your image while providing with a new palette of tones. 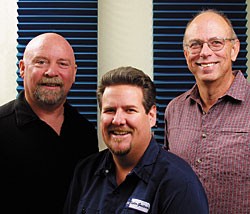 Hey, Bob! Why a Solidbody?

Taylor Guitars’ new SolidBody line of guitars drew much attention at last January’s NAMM show, so it seemed a good idea to ask company President Bob Taylor why, after years of fielding requests, they decided 2008 would be the year. Joining Taylor for our talk were David Hosler, from Taylor product development, and Vice President of Marketing Brian Swerdfeger:

Bob, what finally persuaded you to take the plunge and build a solidbody guitar?
Bob Taylor: Because our ideas came… well, now. You can only work on so much at a time. First of all, we didn’t have the right pickups before. This guitar was completely built on these pickups that we all loved the sound of. They were originally on what would be the next prototype for the T5. We heard the pickups David came up with and liked them, but didn’t think they should be on a T5 or on a future T6. They sounded like they should go in a solidbody. The pickup was the catalyst in that we knew it had to be in a solidbody guitar.

When we decided it was going to be a solidbody, the question was, “Fender- or Gibson-type?” The answer was it couldn’t be either because they both exist, so it had to be our own design and innovation. Then, when we were deciding whose bridge to put on it – Gotoh or Kahler or someone else’s – we said, “Let’s make our own.” We came up with the same answer for everything else – knobs, neck, everything.

These are the things we instantly think of when we decide we’re going to make something, so we really didn’t have to discuss it. The point is, we made a pickup, we loved the way it sounded, so we had to put in the hard work of designing a guitar around it.

David, you were instrumental in designing the Style 1 pickup.
David Hosler: Well, nothing happens on its own. The T5 had become instrumental in our evolution, and the S was going back even farther, and then the NT neck joint. Each thing has bred something else in the way we move forward with design.

Being a player most of my life, like Brian and Bob and others here, you always know the challenges we’ve had as electric guitar players and the things we want to hear. Most people eventually lock in on a signal path they like and they never sell key pieces of gear and they always want one style of pickup. We all recognize the struggles you have to go through to find those things, so the idea was, can we design something and come up with something with which you don’t have to work so darn hard to get the sound you want at the output levels you want. As Brian says, to get the vintage tones with the modern output. That’s a legitimate challenge in a magnetic design. That’s one of the things we were trying to overcome.

Once you came up with the basic pickup, did it take long to complete?
David: Not really. We had been fussing with ideas related to transformer design and being able to control magnetic coupling and flux. We were messing with things just to see where they led, and they led to a different approach to pickup design. But it was just a couple months. We don’t work continuously on one idea.

Brian Swerdfeger: People want to romanticize the development of an idea; our industry loves the thought of some guy spending nights agonizing over things and experimenting to the point of discovering something. But invention and innovation are part of our culture. Bob has bred that into everything we do. So there’s continuous innovation and exploration. David said [the idea for the pickup] kind of came quickly, it’s true, but it’s because of this culture. It’s not, “I sat down and calculated the new design.” We’re not that smart (laughs)! Although our development doesn’t involve one guy slaving to make his own magnets, for example, if you come here it looks like Sid’s room from the movie Toy Story; there are the equivalents of spider bodies with doll heads on them – acoustic guitars with Bigsbys, things that don’t exist in nature. There might be something that was part of an experiment that maybe proved something completely different.

How has the public reaction been to the solidbodies in comparison to your acoustic guitars?
Bob: We’re still primarily an acoustic guitar company, but we’ve shipped over 3,000 solidbodies in just a couple of months, and we’re producing 50 a day. For us, that’s a lot of brand new guitars on the market. At the NAMM show, these guitars invited a whole new group of people into the booth – people who always dug what we were doing but weren’t acoustic players. –


This article originally appeared in VG‘s July 2008 issue. All copyrights are by the author and Vintage Guitar magazine. Unauthorized replication or use is strictly prohibited.
SolidBody: Impressions by Marc Seal