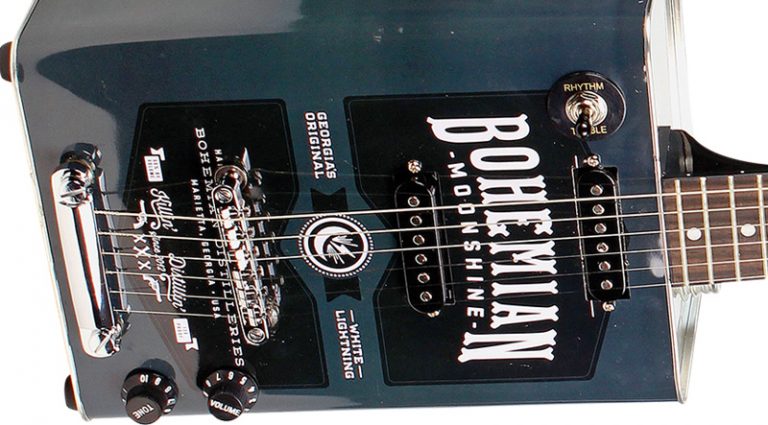 Here at VG, we see all manner of guitars – those made out of steel, graphite, even animal shells. But I’d never seen a guitar with a body made of a can until I saw a Bohemian Boho Series guitar. Obviously the novelty factor played a part in Bohemian’s decision to base a series of electric guitars with bodies made from cans carrying various advertising motifs – moonshine, oil, honey, and surf wax. None ever actually held the substances alluded to on their labels – these are all brand-new cans made in China, not found by scouring the backcountry roads of rural America.

The best parallel between these Bohemian guitars and guitars from the past might be Les Paul’s famous “log” project – basically a neck-through body with pickups and hardware attached. All Bohemian models, regardless of their name or pickup complement, use the same basic body style and construction. The 25.5″-scale neck is attached to the body, which has a basswood frame inside the hollow can. The back of the can has a removable rectangular panel held by six screws to provide access to electronics.

Bohemian makes several Boho models. The Moonshine we tested sports two single-coil pickups. Others include the Motor Oil, which employs a pair of naked humbuckers; the Honey, with its solo single-coil pickup; and the Surf Wax, which has a single P-90. All have the same neck profile with a 1.75″ nut width, 2.125″ width at the 12th fret, and 2.375″ width at the twenty-first fret. All guitars also have the same chrome hardware with an adjustable tune-o-matic-type bridge, tuners with removable keys, a rosewood fretboard, and a maple neck. The two-pickup models have a three-way selector toggle and Volume and Tone knobs; one-pickup models have only Volume and Tone.

Unlike most standard-bodied guitars, which even with a cutaway have somewhat limited upper-neck access, Bohemian’s necks can be played right up to the 21st fret! But because the neck is long and the body compact in comparison, playing a Boho sitting down requires adjusting the guitar’s body between your legs so that you can comfortably reach the first position. With a strap, the guitar rests comfortably but, because the body is relatively lightweight and the neck so long, the guitar is slightly top-heavy, with a tendency for the headstock to dip.

How is the fit and finish? And even more importantly, is it playable? The answers to both questions are affirmative. A Boho Series can be set up to intonate properly, play in tune, and stay in tune. The finishing work throughout is good enough that nothing gets in the way of the instrument’s functionality. The Moonshine test guitar arrived set up with super slinky strings a bit on the light side, but when not driven too hard by the right hand the guitar played cleanly with no buzzes or hums. The frets were well finished with no ends protruding. Sustain, even when played acoustically with no amplification, was excellent. Full-step stretches with super sustain and control were possible with the supplied strings.

The neck shape and profile on the Moonshine model brought to mind a cross between a Gibson SG and Les Paul – slightly less beefy than a Paul, but with more meat than an SG. The range of tones using the single-coil pickups varied from a nice thick front-pickup jazz tone to twangy tones from the rear pickup with the Tone knob turned up to 10.

One final detail that demonstrates how Bohemian guitars are far more than novelty items is the custom hardshell case available for an additional $140. This is a very nicely made case which, due to its shape, may get you confused with a sax player. But the moment of theater when you first open it up at a jam will be memorable – almost as memorable as the looks on other players’ faces when you start playing your Bohemian.