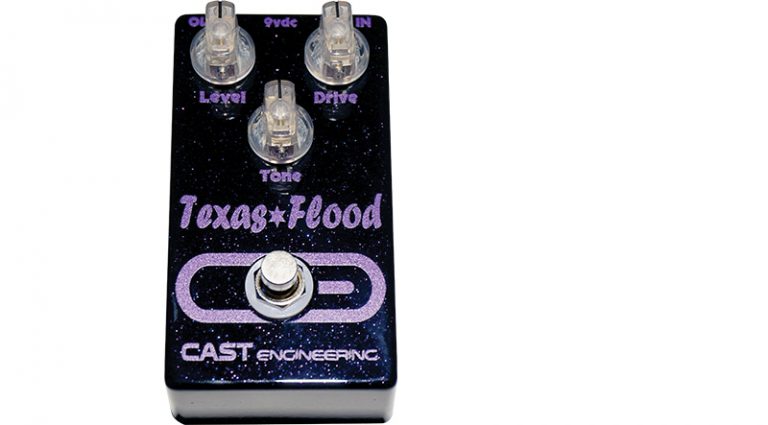 Tube Screamers, those famed overdrives from Ibanez, have been screaming off the shelves ever since guitarists first learned the little green machines were key to Stevie Ray Vaughan’s tone. But no Tube Screamer model on its own, including the early TS-808, TS-9, or TS-10, will get you very close to SRV territory. Neither do the copycats. With the Texas Flood overdrive, however, Cast Engineering aims to succeed where TS chasers, imitators, and mod mavens have failed.

Cast based the Texas Flood on the TS-808 while sidestepping that pedal’s limitations, and they built in other sonic characteristics of SRV’s signal chain so that his overall sound could be approximated even without a Dumble amp, ’65 Strat, and the best touch in Texas. The result is a warm overdrive that mixes soft-clip gain with earthy grit. We found that the pedal added a lot of body and was great for obtaining a full, woody sound in a variety of settings.

The throw of the Drive is a big selling point for the Texas Flood. There’s more usable gain than you’ll find in many pedals. With the Drive set very low, the pedal can function as a nearly transparent clean boost. Just shy of 11 o’clock it’s dirty but responsive; you can clean up with a lighter touch on the strings or add a cutting edge by diming the guitar’s volume and digging in with your attacks. At around the 2 o’clock the Texas Flood starts to saturate, allowing a long, natural sustain.

Steve Evans, of Cast, spent a year chasing down schematics for the TS-808 that Cesar Diaz modded for Vaughan and then re-created a prototype exactly to spec. And guess what? It sounded awful. Diaz had selectively removed capacitors to get rid of extra filtering (which narrows and squashes the tone), but taken out of context the mod amounted to a shrill treble booster. The Texas Flood maintains the openness of Diaz’s 808 while bringing out a guitar’s rich mid-low EQ and preserving top-end sparkle.

The Texas Flood will help players achieve an overdrive like Stevie Ray’s, and it has the range to cover plenty of other OD/gain scenarios. Of course, there was more to SRV’s enviable tone than his signal chain, including elusive factors like a great pair of hands. But the Texas Flood can get you mighty close. Run a Strat with hot pickups in the neck position through this box and into a Fender-style amp with the bass boosted and the mids scooped. And a pair of cowboy boots wouldn’t hurt.