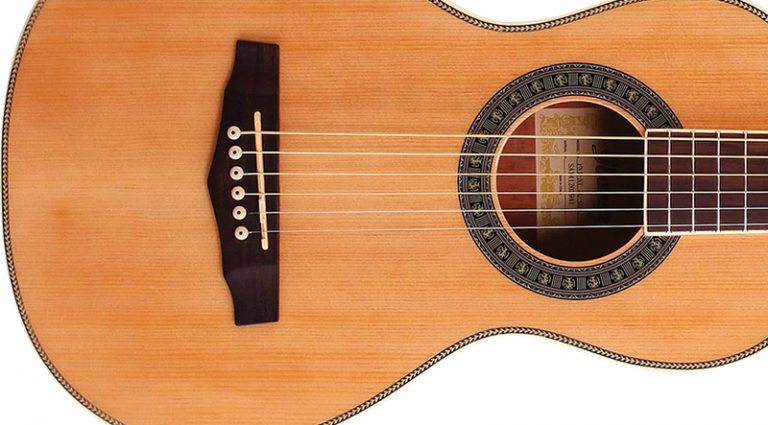 In recent years, the parlor guitar has exploded into popularity, reviving a 19th century instrument that was, as its name implies, played in the parlor – the small room used for entertaining guests or as a gathering place for family. In a diminutive space like that, guitarists didn’t need a booming, big-body guitar, hence the distinctive shape. Another hallmark of the parlor design is the clear, bell-like tone it produces, with not much emphasis on the bass range, but an enchanting high end.

Ibanez adapts the parlor concept with their PN1, a guitar that’s in the tenor range (our test model was tuned A to A, instead of E to E). The guitar has a spruce top (using an X-bracing pattern) and mahogany back and sides, all with a natural high-gloss finish. The neck is mahogany with a rosewood fingerboard, featuring a 24.5″ scale length and 18 frets. Other appointments include a rosewood overlay on the headstock, vintage open-gear tuners, and a rosewood bridge. The body binding is ivory with herringbone purfling and a mosaic rosette around the soundhole. The PN1’s dimensions are 18.25″ long by 12″ wide and 3.75″ deep.

In the lap, the PN1 balances nicely, while its neck has a larger, U-shaped profile. It’s quite comfortable and feels like a normal-sized acoustic. Since it’s in a tenor range, the tone is bright and lively, with chime-like accents that make chord arpeggios ring out. The tonal range is quite satisfactory – you can’t expect jumbo bass notes, but if you’re playing with a bassist or even a dreadnought strummer, you don’t necessarily want any low end competing with their deeper notes. And despite the smaller body size, this tenor is dandy for fingerpicking, thanks to pleasing string spacing and that fuller-feeling neck.

You might also do a double-take at its price. While some parlor guitars go for thousands of dollars, the China-made PN1 sells for about $150 street. It’s in just about every guitarist’s budget and should appeal to both experienced players who want to get into the parlor or tenor game, as well as those who prefer smaller acoustics or even newer guitarists. Either way, the PN1 is a solid instrument in its price range, offering old-school vibe in an attractive package. If you want to go for a parlor with a more traditional slotted (or open) headstock, check out the slightly more expensive Ibanez AVN1. Either way, you can expect Ibanez’s well-known bang for the buck.