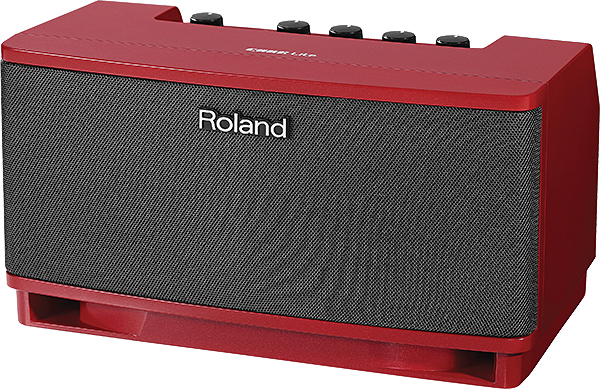 At just under four pounds, and with a 10″ x 6″ footprint, the Roland Cube Lite is about as compact and lightweight as an amp can get while still being considered a real amp and not just another one of those gimmicky battery-operated units.

The Cube Lite utilizes a multiple-speaker system featuring three 3″ speakers – two for full-range true stereo sound and one as a dedicated subwoofer – with 10 watts of total power: three watts each to the stereo mains and four watts to the subwoofer. The results are an impressively full and very big sound for its size, whether the amp is being used for playback from an MP3 player, or a guitar, bass, or keyboard is running through it. The Cube Lite has a nice and punchy full sound with round low end, even midrange, and clear highs – not at all boxy sounding like one might reasonably expect.

The Cube Lite has three amp models accessible with a slide switch – JC Clean, Crunch, and Extreme – as well as built-in effects. The JC Clean amp setting is modeled after a Roland Jazz Chorus and offers a fat and lush clean sound that works great with electric and acoustic guitar, bass, and keys, the Crunch and Extreme settings offer a wide variety of distortion sounds, from slightly crunchy to over-the-top smooth and saturated distortion. The built-in hall-style digital reverb is clean and crisp, adding even more depth and expanse to the amp’s already big sound, while the built-in chorus is classic Roland – super-rich with nice pitch shifting.

Controls include active Bass and Treble tone controls, Volume and Drive knobs, and a Chorus/Reverb knob to control the depth of those built-in digital effects. Ins and outs include a standard TS 0.25″ jack for the instrument, an auxiliary 3.5-millimeter TRS jack with its own Volume control for an MP3 player, a 3.5-millimeter TRS headphone jack, and a proprietary four-pole mini jack for iPods and iPads. The iPod/iPad connection, when used with the available Cube Jam app, allows the user to not only playback from their device, but record to it as well.

The Cube Lite is an impressive and fun little amp/interface for the desk or home studio, with a big full sound, high-quality effects, and thoughtful, easy-to-use features. In other words, it’s a great practice/recording tool for just about any musician.