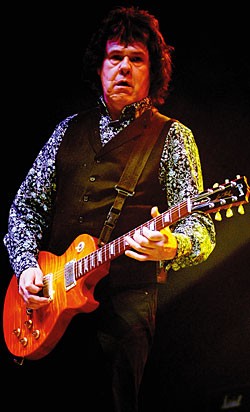 Irish guitarist Gary Moore is a man in perpetual motion, onstage and in the studio. A veteran blues/rocker who spent time in the legendary Thin Lizzy, Moore, who has amassed a number of renowned albums in his solo career, recently spoke with Vintage Guitar while he was on tour with B.B. King. The topic at hand was his two recent releases with very different material.

One is a DVD of a tribute concert for late Thin Lizzy bassist/vocalist Phil Lynott, recorded with other former Thin Lizzy guitarists and drummer Brian Downey. The other new release is an album that mixes several styles, Old New Ballads Blues.

One Night in Dublin: A Tribute to Phil Lynott was recorded on August 20, 2005, commemorating what would have been Lynott’s 56th birthday. A statue of the late bassist was unveiled in Dublin earlier that day.

“There had been talk about putting up a statue in Dublin for some time,” Moore told VG. “And Brian and I had been talking about doing something around that event. He told me there was no gig planned, but then I got a letter from my agent about a concert being worked up, asking if I’d be interested in headlining. I said I would, but then I thought about it, and said ‘I’m not just gonna bring my band. That doesn’t make sense.

So when I spoke to Brian again, we decided to ask Brian Robertson, and once I’d asked Brian, I figured I’d better ask Scott Gorham, and then I asked (original guitarist) Eric Bell, because he’s an old friend of mine. I chose the guys I considered to have been the main players with the band. We only had about an hour-and-ten-minute set to do, so I really couldn’t go any further into it.” 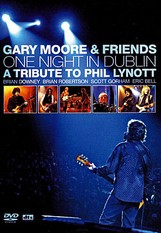 I started the evening as a three-piece, and then we had them come on one at a time. I started the show with one of my songs, ‘Walking By Myself,’ then we got into the Thin Lizzy material. I didn’t want to come out and launch straight into something like ‘Jailbreak.’ I had to learn Phil’s vocal parts, and I’d never sung some of those songs onstage, so I first wanted to find my feet.”

Classic Lizzy tunes and riffs delighted the sold-out venue, and Moore closed the show with “Parisienne Walkways,” a song that has become a concert staple of his solo career.

Moore uses two Gibson Les Pauls on the DVD. One is his signature model, while the other has a quilted maple top in a charcoal finish.

“I found that one at a Gibson artists’ show in London,” Moore said of the latter axe. “I thought it looked very pretty. It’d been made for the guitarist with the Corrs, but he didn’t like it because it wasn’t light enough. So I said, ‘Well, I’m gonna take it home with me!’ It’s more of a rock guitar; I wouldn’t play blues on that one.”

The new CD also features Noyce on bass, as well drummer Darrin Mooney, who’s been with him for about seven years. Keyboard player Don Airey, who was on Moore’s Still Got The Blues, fills out the lineup. The Midnight Horns (Nick Payn, Nick Pentelow, Frank Mead, and Sid Gould) appear on two tracks.

Old New Ballads Blues lives up to its title as a genre-hopping effort, and Moore utilized several guitars on it, including his signature Les Paul, a ’59 Les Paul, and a Telecaster, which he admitted “…is very unusual for me.”

The proceedings start with Moore playing slide and leaning on his wah pedal to introduce “Done Somebody Wrong.”

“I do that sometimes,” he noted. “It gives the song a real edge.”

Unique and melodic solo guitar abound, as on “Gonna Rain Today” and “Flesh and Blood.” 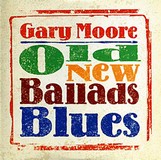 The former employs a clean guitar sound on a Moore signature Les Paul. “It’s turned down – very, very quiet, through a Marshall that was set very clean. I made of point of playing softly, so it’s kind of an old soul thing to it – an intimate Memphis vibe. On ‘Flesh and Blood,’ I was trying to create a music-box sound… a Christmas Eve bell-like sound. I used three guitars layered on top of each other, with a rotating speaker sound on a Line 6 POD, so you’re hearing sort of a shimmering fast-Leslie (speaker) sound. I played harmonies that cascade down a bit.”

One of the notable Telecaster songs is “No Reason to Cry,” where Moore makes effective use of the guitar’s volume control.

“Last year, I rediscovered Roy Buchanan,” he explained. “I hadn’t listened to him in a long time, and I’d forgotten how much I loved his playing. So you definitely hear that kind of influence (on that song).”

Two tracks that originally appeared on Still Got the Blues have been re-recorded.

“To tell you the truth, I wasn’t happy with the version of ‘Midnight Blues’ we’d done originally,” said Moore. “We’d kind of ended up using the demo on the album; I always thought it sounded kind of thin. I wanted to give it some more depth this time, so I put the horns on there to give it a bit more flavor. I think it sounds better now. ‘All Your Love’ has always been a very important song that I heard Eric Clapton play in the ’60s with John Mayall on the Bluesbreakers album. And I wanted another shot at getting it right, so this version is more faithful.”

Obviously, Moore was delighted with his tour slot with B.B. King (“He’s 80 years old, and he’s incredible!”), but he’s also upbeat about the two new releases, which should make for interesting viewing and listening for fans of both Lizzy and Moore.


This article originally appeared in VG‘s September 2006 issue. All copyrights are by the author and Vintage Guitar magazine. Unauthorized replication or use is strictly prohibited.