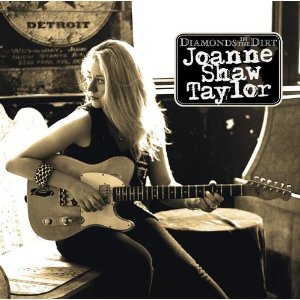 Joanne Shaw Taylor is a young British guitarist who, with this album, is moving beyond the blues. While her guitar style is certainly rooted in familiar ground, she writes songs more on the side of soul world and on occasion even tilts toward pop.

“Dead and Gone” is a good place for the uninitiated to be introduced to Taylor. Its funky electric intro builds into a forceful blues-rocker. The solo is bold, in-your-face, and proves Taylor has learned her lessons well. Several cuts, including “Who Do You Love”(not the Bo Diddley classic, but a Taylor original), with its memorable riff and solo with big bends, prove it. What’s really intriguing, though, are songs like “Same As It Never Was,” a pop-soul march with melodic guitar leading the way. Her vocals are, as always, incredibly soulful, calling to mind Joss Stone. Other cuts, including the title song, also point to Taylor’s burgeoning triple-threat talent (singer/ guitarist/songwriter) that could make her a star. At 24, she appears to have a bright future that could see her cross several genres.