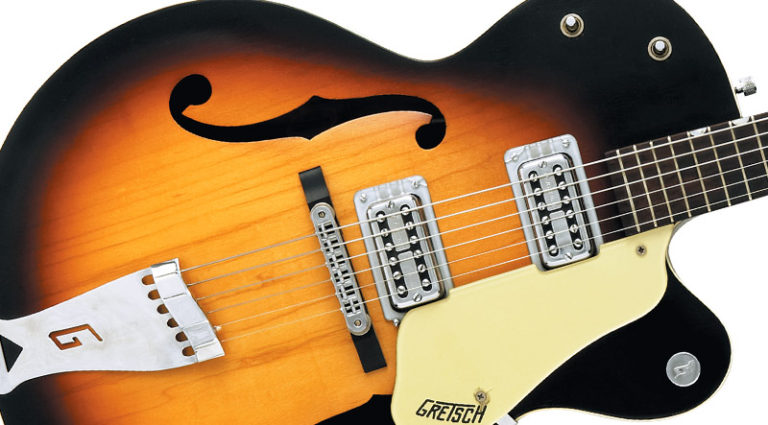 In the 1960s, the astronauts were bigger cultural icons than the Beatles.

And no, that’s not the Colorado-based surf band that hit with songs like “Baja.” We’re talking real astronauts, as in guys who climbed into tin cans perched atop 30,000 pounds of dynamite, lit the fuse, and broke the proverbial “Earthly bounds” of gravity.

Mankind made its first voyage to outer space in April, 1961, and eight years later left footprints on the Moon. The efforts of the astronauts of the Mercury, Gemini, and Apollo space programs were, of course, documented by radio, newspapers, television, and textbooks as the United States and the Soviet Union duked it out in the “Space Race.” The astronauts of the original Mercury missions, in particular, enjoyed deity-like stature among the press and public, as chronicled in Tom Wolfe’s The Right Stuff and other tomes.

In the Fall of 1960, this first-generation Gretsch 6117 Double Anniversary was purchased by U.S. Navy Commander Scott Carpenter, one of the original “Mercury Seven.” Its serial number is from late 1959 or early ’60, and Carpenter, now 80, recently told Vintage Guitar about his introduction to guitar and his affectation for folk and Calypso music in those days, citing tunes like “Yellow Bird” and “Day-O”.

“I was attending the University of Colorado Engineering School,” Carpenter said. “And I went home with a classmate one afternoon; he had a guitar and knew how to make three chords, and I was hooked.

“I ended up owning several guitars,” he added, “including a Martin, and a bunch of other stringed instruments – ukuleles and a tiple, which I loved.”

Carpenter purchased the Gretsch in New York City in the Fall of 1960, when he and his wife, Rene, were in town to see a Broadway play accompanied by fellow Mercury astronaut John Glenn and his wife, Annie. After attending a matinee performance of The Miracle Worker at the Playhouse Theater, they made a quick jaunt up 48th Street to Manny’s Music just before it closed.

“I don’t know why I decided on a Gretsch Anniversary,” he said. “I thought, at the time, that I was getting the top of the line. And it is a well-made instrument.” Even when it wasn’t plugged in, Carpenter liked the guitar’s sound.

Gretsch launched the Anniversary series in 1958, which was the company’s 75th year in business. The line was made up of the single-pickup 6124 and the two-pickup 6117 in sunburst finish, as well as both configurations in Smoke Green finish (called the 6125 and 6118, respectively). They had a 16″ single-cutaway maple body that was 21⁄2″ deep, and ebony fretboard with “thumbprint” fret markers. The headstock had a small “Anniversary” plaque with a diamond logo etched into it.

Like many Gretsch instruments, the Anniversary series has undergone numerous changes in its history. The original 12-polepiece Filter’Tron pickups on first-configuration models were supplanted by less-potent Hi-Lo’Tron pickups, and the series ultimately underwent numerous alterations concerning electronics, hardware, and cosmetics.

The control layout of first-edition Double Anniversary models is particularly intriguing. Note the pickup toggle switch and three-position tone switch on the upper bout, the master volume control on the cutaway, and the individual pickup volume controls on the lower bout. The bottom-line is that if this guitar was finished in orange and had a Gretsch-branded Bigsby vibrato instead of a “G” tailpiece, it would be a Chet Atkins model 6120 – Gretsch’s flagship model of the era.

This example has a replacement tune-o-matic-style bridge that is more stable than the original, which had six threaded wheels that allowed alteration of string spacing, but no intonation capability.

Carpenter was only the fourth American to venture into outer space, making his three-orbit journey in Aurora 7 on May 24, 1962. That’s almost 21 months before the Beatles appeared on “The Ed Sullivan Show.” Sadly, though, in 1964 he sustained an injury to his left arm that forced him to give up guitar.

“I can’t supinate [it],” he said. “I can’t make barre chords. But I play four-string instruments on occasion, like a uke or a tiple, so I can still join in the fun.”

Carpenter ultimately gave the 6117 to his daughter, Candace, who graduated from Berklee School of Music and counted the redoubtable Emily Remler among her instructors. She now teaches guitar and uses the 6117 in her jazz combo, the Jean Poole Trio, in the Boulder, Colorado, area, where she and her father reside. Since the guitar has been in her possession, the bridge has been replaced, a neck separation has been repaired, and the instrument has been re-fretted.

Carpenter’s older daughter, Kris, also resides in Boulder, and collaborated with her father on his life story, For Spacious Skies, which was published in 2003.

This Gretsch Double Anniversary model is cool and collectible in and of itself, but it’s even more interesting given its association with a real American hero.

Special thanks to Kris Stoever and Candace Carpenter. This article originally appeared in VG’s March 2006 issue. All copyrights are by the author and Vintage Guitar magazine. Unauthorized replication or use is strictly prohibited.