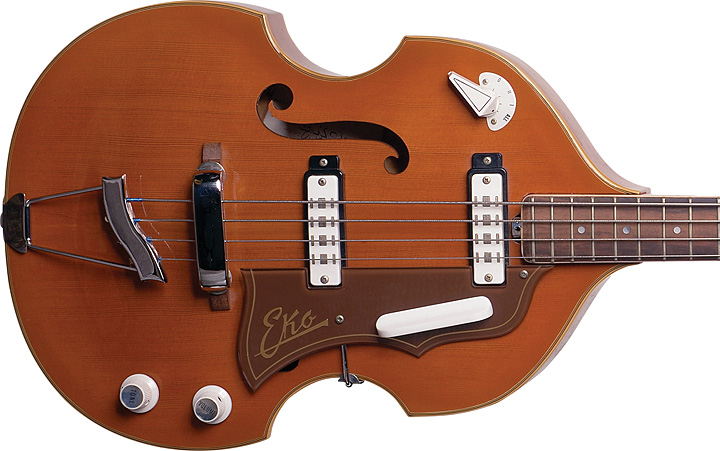 The Beatles’ appearance on “The Ed Sullivan Show” in February of 1964 is often referred to as the most important event in the history of rock music, having inspired thousands (millions?) of teenagers to play in a band.

Many budding bassists aspired to own a violin-shaped instrument like the one Paul McCartney played on the show; his was a Höfner, which was out of reach, cost-wise, for most at the time. But there were cheaper alternatives, like the Eko 995.

Eko guitars and basses were crafted by the Oliviero Pigini company of Recanati, Italy, founded in 1959. From the outset, the firm concentrated on accordion manufacturing and expanded into guitar production in the early ’60s. One of its accordion clients was the Lo Duca Brothers Musical Instruments company, of Milwaukee, which joined forces with the Italian manufacturer as the exclusive distributor of Eko guitars in the U.S.

Eko guitars and basses came in myriad styles and shapes; Strat-like instruments, semi-hollow electrics, the rocket-shaped Rokes, and even map-shaped instruments, a la National. There was even an early solidbody violin-shaped bass.

One of the 995’s most intriguing aesthetic features is the square protuberance on its headstock. With its gothic E logo, it certainly was eye-catching compared to other headstocks and logos of the era – and certainly did not give off a rock-and-roll vibe! The bound rosewood fretboard on the one shown here has 21 frets, and joins the body at the 16th (Lo Duca literature claimed the fretboard was ebony). The hyper-slim bolt-on neck has five-piece laminate construction – maple with rosewood stringers. It measures 1 3/8″ wide at the nut, and there’s a zero fret. The serial number is embossed on the neck plate.

The Oliviero Pigini company also made Vox guitars and basses in the same era, and this Eko has the same truss rod adjustment system (at the end of the neck) as the Vox Saturn Bass (VG, May, 2010). The different-sized dot markers on the fretboard are also found on the Saturn.

The body is 13″ wide and 2 3/4″ deep. It has an arched spruce top, birdseye maple back and sides, and three-layer binding (white/black/white) on the edge. Its Dura-Glos finish is called Honey Brown. Electronics include two height-adjustable pickups with staple-type polepieces. A Lo Duca Brothers catalog refers to them as having “double polarity,” inferring they’re humbuckers.

The four-position pickup toggle has a standard three-way operation plus an “off” position. Control knobs are master Volume and master Tone. Hardware includes budget-grade tuners, a harp-shaped tailpiece, and a bridge that once again invites comparison to Vox. Like the Saturn Bass, it has adjustable saddles for height and intonation under the snap-on cover. The base of the bridge is rosewood.

The pickguard is made from clear plastic with the gold logo screenprinted on the underside followed by the application of brown paint. The oversized white finger rest is also plastic.

In the late ’60s, the frontline endorsers for Eko’s 395 and 995 instruments were the Grass Roots (“Temptation Eyes,” “Let’s Live for Today,” etc.), and the band appeared in an ad to promote the models. In the same era, left-handed bassist Doug Lubahn (VG, February ’10) played a flipped-over 995 (strung “righty”) with his own band, Clear Light, and used the instrument as the in-studio bassist for the Doors on songs such as “You’re Lost Little Girl,” “People Are Strange,” and “I Can’t See Your Face In My Mind,” among others.

“The Eko had a beautifully-rounded sound if you played it with a pick,” Lubahn recalled in his interview. “If you plucked with fingers, though, it didn’t sound so hot!” More recently, Les Claypool (of Primus) has been seen plunking on a vintage 995.

Eko must have been doing something right with the 995, considering its popularity in its time. It wasn’t the fanciest “Beatle bass” wanna-be, but it wasn’t the worst of the genre, either. When they see it, many a babyboomer player will nod their head and mutter, “Yeah, I remember those…”