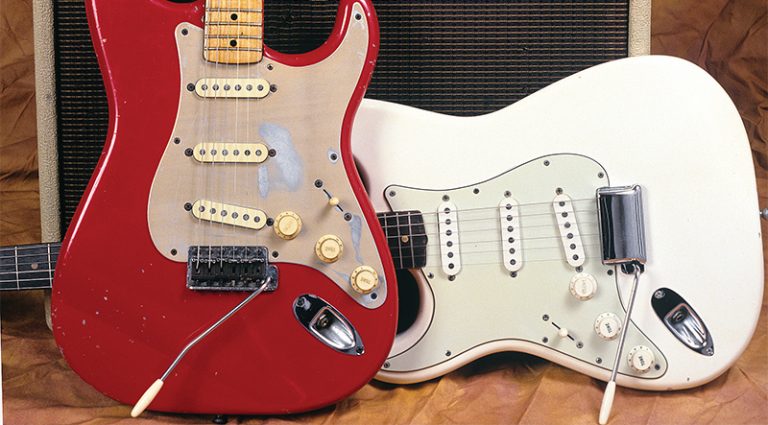 The Fender Stratocaster is arguably the most popular electric guitar model in the world. From the time of its introduction in 1954, no other electric has outsold its archetypical design. And unlike its fellow archetype, the Gibson Les Paul and its numerous variants including the Junior, Special, Standard, and Custom, the Stratocaster was always been just one model, available with or without a vibrato tailpiece.

Upon its debut, the “Strat” was revolutionary and, stylistically, today it doesn’t look the least bit dated. With a deeply contoured ash body with two-tone sunburst finish, one-piece maple neck with black dot inlays and walnut backstripe (which was the only option available until late ’59), “no-line” “Pat Appl’d” Kluson Deluxe tuners, three single-coil pickups with three-way pickup selector switch, white polystyrene thermoplastic (commonly referred to as, but not actually “Bakelite”) Tone and Volume knobs, pickup covers and switch tip, spaghetti peghead decal logo, round string tree, serial number stamped on the neck plate, and round hole tremolo back plate. This instrument is as visually appealing as ever and never needed a redesign to remain current. Its lines flow with an aesthetic appeal undiminished as time goes by.

Many of the Stratocaster’s features were revolutionary when introduced and have had a lasting influence on electric-guitar design. It was the first guitar to employ an ergonomically friendly contoured body shape Leo devised with input from Freddie Tavares, Bill Carson, and others – its back doesn’t poke into the player’s rib cage, and their strumming arm doesn’t rest on a sharp body edge.

Leo also designed a new “Tremolo” tailpiece (which he misnamed, given that its effect is vibrato, or a change in the pitch of a note, not the volume/intensity of that note, which is tremolo!) specifically for the Stratocaster that fit more sleekly than previous designs, and is recessed. Earlier vibratos, such as Doc Kauffman’s design from the ’30s, were difficult to tune. Though Paul Bigsby’s design worked much better than the Kauffman design and is still popular to this day, Leo’s response to the challenge incorporated the bridge with the vibrato rather than having a separate bridge and tailpiece. This is the first such design and still works well for most playing styles.

For all but the first year of its history, the Stratocaster has been available in vibrato and non-vibrato versions, but the “hardtail” model has never sold nearly as well as the standard version. Though many players don’t use the vibrato and even block it off to immobilize it, players and collectors will still pay much more for a vibrato-equipped model. Many players prefer the vibrato version because rather than having the bridge fixed to the wooden body, it’s set on a metal block connected to springs within the body, which alters the tone significantly.

The Stratocaster peghead shape is very different from the early Telecaster shape and is arguably the most widely recognized Fender peghead, though it is sometimes compared to Bigsby’s design from 1949. Fender was not the first to use six-on-a-side tuners; numerous Viennese makers – most notably Stauffer – were using the arrangement as early as 1814, and Martin employed on guitars in the 1830s and 40s. The Strat peghead, however, may be the ultimate refinement of the concept.

Early Stratocasters were also the first Fender instruments to use six adjustable bridge saddles, which were designed in response to customer feedback regarding tuning and intonation on the three-saddle Telecaster bridge. The feature was designed contemporaneously with Gibson’s Tune-O-Matic bridge which first appeared in late 1953 on the Les Paul Custom and in Gibson’s catalog in ’54. Leo may have been unaware that Gibson was working on a comparable new design, but his is radically different. The Stratocaster was also the first Fender guitar with three pickups and a three-position slide pickup selector. The Gibson ES-5, which debuted in June of 1949, had three pickups, but didn’t have the four-position pickup selector until ’55, when it was renamed to ES-5 Switchmaster.

The first Stratocaster prototypes were built in April or May of ’53 and the first production run began in October of ’54. Early Strats were loaned to Bill Carson and other musicians, and tweaked following their suggestions. During the first year of development, many small changes were made. As many as 113 of the earliest Strats had the serial number stamped on the vibrato plate, beginning with number 100. By late May of ’54, serial numbers were stamped on the neck plate using four-digit numbers starting with 0001. Fender employees installed these plates in a grab-bag manner such that the instruments were not sequentially numbered upon completion.

In ’54, three generations of pickup covers, knobs, and switch tips were used; during the first generation (until June/July), the knobs had a short skirt, pickup covers had rounded edges, and the switch tip had a football shape. These had a marbleized, translucent look. During the second generation (July to August), Fender used the same molds, but the components were made of white polystyrene thermoplastic “Bakelite.” By late ’54, Fender was using “Bakelite” with modern-shaped knobs and covers. At the time, they also changed to the modern-shaped switch tip. White polystyrene thermoplastic “Bakelite” was used through ’56, at which time Fender switched to more-durable modern plastic after receiving complaints that the original material did not hold up well under normal playing conditions; players were wearing through pickup covers, and the knobs and switch tips were breaking.

Stratocasters were put into full production in October, 1954, after which there were far fewer design tweaks, which is why the ’54 Strat looks so similar to those made ever since, though aficionados know (and care passionately about) the subtle alterations over the past 60 years. Other key tweaks included:
• 1954 examples have round holes in the vibrato plate on the back, which made it awkward to re-string. So, in ’55, Fender started making the holes oblong.
• The earliest Strats have a narrow vibrato cavity with three springs, while production versions have five.
• Until the fall of ’54, the string holes in the vibrato block were shallow and the edges were very rounded.
• The Strat did not have a wire route until the summer of ’54, and early examples were hand-chiseled.
• The instrument had more-rounded peghead edges until ’55.
• The round string tree was discontinued in ’56.
• Earliest examples have a single-ply white pickguard with a matte finish on the bottom. Later examples have single-ply white pickguard with a glossy underside. The pickguard style wasn’t changed again until ’59.

Timeless instrument designs not only have good proportions and are ergonomically comfortable, but also have lines that flow and feel right. And, the most successful instruments are versatile enough to be used for a variety of musical genres and playing styles – the Gibson F-5 mandolin was designed for classical music, not Bill Monroe or David Grisman. Telecasters weren’t intended for Roy Buchanan or Alvin Lee, and the designers of the Martin dreadnought certainly didn’t consider its future with Tony Rice or bluegrass music. Over the years, artists spanning a range of genres have played Stratocasters including Jimi Hendrix, Eric Clapton, David Gilmour (who owns the Strat with serial number 0001), Stevie Ray Vaughan, John Frusciante, and John Mayer. The Stratocaster has been used to create styles of music Leo Fender could never have imagined when he introduced this revolutionary design.

Ditson’s Style 11 and the Birth of the Dreadnought