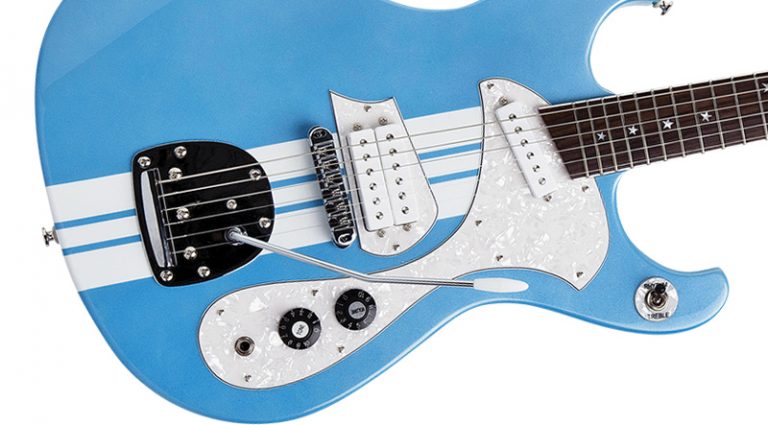 There are times when a traditional Strat or Tele won’t scratch a particular itch, and you need a retro plank with a specific look and sound to get the job done. The DiPinto Mach IV might be a choice for such situations. While its classic ’60s looks (inspired, of course, by the Mosrite Ventures model) evoke a number of vintage and alt-rock styles, the build certainly goes well beyond many of those guitars of yore.

Designed by Philadelphia-based builder Chris DiPinto and made in Korea, the Mach IV has a shred-fast neck of two-piece maple that’s affixed to the body with four bolts. This meaty C-profile neck has a 243/4″ scale, 22 frets, and a rosewood fingerboard with star inlays and white binding. The offset, double-cutaway body is made from a hefty chunk of mahogany and comes painted in Candy Apple Red or Sonic Blue with white racing stripes and two pearloid pickguards – check out the little one surrounding the bridge pickup. Cool idea. A third standard color, Sedated White, is an obvious nod to the aforementioned Ramones-associated Mosrite and comes with black pickguards and dot inlays (pink and metal-flake gold are available as “custom” colors, both with stripes).

The Mach IV is available with a tune-o-matic-style bridge with stop tailpiece, or a vibrato. The vibrato-equipped Mach IV held its tuning quite well, even with some steep dives. The guitar comes with a DiPinto single-coil pickup in the slanted neck slot and a DiPinto dual-single in the bridge. A push/pull Tone knob makes the bridge pickup a true single-coil. Other controls include Volume, Tone, and a three-way pickup selector. The tuners are enclosed-gear pearl-button machines, another nice retro touch. To boot, the Mach IV can even be ordered as a lefty model or an electric 12-string.

Tonally, there are lots of fun sounds to be found on this guitar. Bring up some clean timbres and then dial in some reverb for classic surf and country tones in the Fender vein, especially at the bridge pickup. Dial up the gain and the Mach IV offers gnarly British Invasion or garage-rock sounds. Crank up more dirt with the dual-single for perfectly rude hard rock and metal riffery. The Mach IV covers all these bases almost effortlessly.

With high marks for looks, tone, and playability, the Mach IV should be a serious contender for anyone looking for a versatile retro-styled axe at an affordable price.