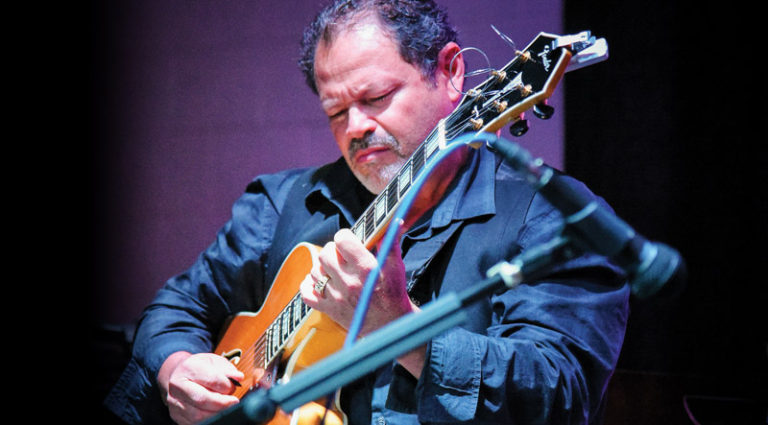 Jazz covers of rock songs often fall flat on their face, but Cuban-American guitarist Jorge Garcia nails it on Crossover. These aren’t corny covers – Jorge reinvents tracks from Led Zeppelin, Yes, and Jimi Hendrix as serious and authentic post-bop, often backed with a badass groove. How did Garcia do it? VG asked the gifted jazz guitarist to break it all down.

How did you find the sweet spot between rock, jazz, funk, soul, and Latin?
That elusive “sweet spot” kept me up many nights during the creation of this CD, as each song has a specific sound and feel. The melody of each song is the driving force on how the song will resemble the original artist. At times, I would work out a rhythm, but the melody sounded forced, so it was back to the drawing board. For example, I heard the melody from “Purple Haze” in 7/4, with a natural feel – yet it doesn’t feel like 7/4. It just sounds funky.

There’s a ’60s soul-jazz sound throughout, such as Pat Martino, Grant Green, and George Benson. Was that era inspiring to you?
Absolutely, they were great influences on me. The first jazz guitarist I listened to was George Benson; then I went back to Charlie Christian and Wes Montgomery. George and Wes had a profound effect on me and were very influential in my growth. The tone of Wes, the feel, and long melodic lines I just love. George, his funky and bluesy lines moved me tremendously. Then Martino, Metheny, and Joe Diorio continue to be a very integral part of my development and inspiration.

You were born in Cuba, but came to the U.S. and took guitar lessons at school. Tell us about hearing American music on the radio in Cuba.
In Cuba we were not allowed to listen to American music; it was against the law. However, on clear nights we would get radio broadcasts from Miami. That is when we tuned in and listened to the Beatles, Jimi Hendrix, and Procol Harum. I didn’t get into jazz until I came to the United States. At 13 I got my first guitar, and that was when I heard George Benson and Al Di Meola – and realized I could not play the way they played. It was time to woodshed. But the freedom of jazz reverberated in my soul, aligning with my newfound freedom in the United States. So, the music really just called me.

It was a particularly bold move to open with an iconic track like “Purple Haze,” but it has the right vibe and attitude. Talk about Jimi’s influence on you as a player.
The first time I heard Jimi was his live “Star-Spangled Banner” at Woodstock, and “Sgt. Pepper’s Lonely Hearts Club Band.” His approach to playing rock was different than anyone else. He played very freely and was always searching to be creative, utilizing rhythms that no other rock guitarist dared to attempt – that has stayed with me.

ELP’s “From the Beginning” is an interesting choice and you add a groove not present on the original. Greg Lake was also a cool, underrated guitarist.
I have so much respect for Greg Lake and I agree he was underrated. He was really a force to be reckoned with in the industry. Lake also was a very talented composer, one who heard things others could not.

Of the artists you cover here, which have you seen in concert?
The only rock group I’ve seen live is Yes, but jazz guitarists I have seen are Pat Metheny, Joe Pass, and Pat Martino, who I got to spend some time with backstage. I also played and became friends with Joe Diorio. We studied with the same teacher, the great Vincent Bredice. Vincent taught me so much, about music and life – lessons I still use today.

“Black Dog” has a wild, harmonized guitar part and spellbinding beat.
The time signature is 6/4 in an Afro-Cuban feel. That was a tough song to figure out; I could hear it, but it was difficult to get on paper. The harmonies are three guitars overdubbed with a distortion patch – that’s the only rock-sounding guitar on the album. Go figure, a classic-rock album with no distortion!

What gear did you use?
A Fender D’Aquisto archtop and a reissue ’65 Deluxe Reverb. My pedals included an Xotic EP Booster and a Boss digital delay.

Your band is spectacular. There’s some great bass work from Nicky Orta.
Yes, Nicky is a great bass player and he also studied with Vincent Bredice. We go back a long way, to when we both had a lot more hair and were fresh in the scene. Pianist Abel Pabon and drummer Rey Monroig are strong, as well. We’ve all been friends for a long time, so the music flows naturally. These are all talented musicians that are easy to create with; I’m already writing Crossover II and hopefully heading into production soon for a release by summer.