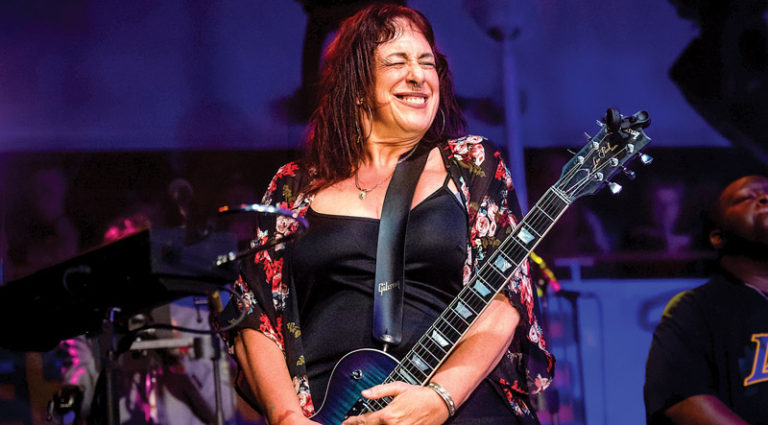 Joanna Connor’s new album is a killer batch of tunes with a live feel infused by the spirit of Chicago’s Theresa’s Lounge. A slide guitar opus, 4801 South Indiana Avenue was produced by Josh Smith and Joe Bonamassa, who pull the reins a bit on the blues-rock queen’s eclectic talents to serve a higher calling – butt-shaking Chicago blues. The title bears the defunct venue’s address, but Connor keeps the club’s vibe alive with hellacious guitar virtuosity, songs, and vocals to match.

When did this part of your career start to snowball?
In May of 2019, when I put out this little video. It was 30 seconds of me playing a solo at Kingston Mines, making guitar faces. Vernon Reid got in on it, which was amazing. Then there was Tracii Guns and Joe Bonamassa. I reached out to Joe, and he said, “I can help you.” I said, “Oh boy!” Now, that’s a great message from Joe Bonamassa (laughs)! It was weird, but that video kicked it off.

What was Bonamassa’s idea?
He said, “I’d like to make a record with you. I have a vision of how we can do this and present all your power.” He started describing all this stuff and said he’d like to bring in Josh Smith. I knew Josh from years ago, when he used to sit in with me whenever I played in Florida. He was 12 years old. He’s a guitar player’s guitar player, and he came to Kingston Mines to see me play and took notes. That’s when I knew this was going to happen.

What was running through your mind?
It was a dream, like a little piece of musical heaven. We worked hard and kicked ass. Joe was the best producer I’ve ever worked with. We were gathered in one room, playing together with these great musicians. Joe said, “If we don’t get these tunes in one or two takes, we’re just gonna trash it and move on. I want power, energy, and I want soul.” I just went with the raw energy. We did it all in four days.

Bonamassa really encouraged you, vocally.
That was the hardest I’ve ever sung in my life. I wasn’t used to that. My whole thing was, “White girl singing the blues, belting it out. Is that the way I should do it?” I was always trying to figure out the best way to be a good vocalist, especially being a white singer doing blues and African-American music. I didn’t want to be inauthentic. I wanted to be myself and deliver it so it was true and convincing. The vocal part was always dicey for me. I feel more comfortable on guitar. Joe said, “I want the vocals to be as tough as your guitar playing.” Because Joe is a singer, that helped, too. I screamed my guts out. My voice has always been powerful except when I sang next to Luther Allison (laughs).

How did Bonamassa record your guitar?
No pedals (laughs)! I brought my pedals and he said, “No!” We tried a Klon, and he said, “No! We’re going to play straight through a ’55 Deluxe.” It was a dirty, nasty little amp. I played my Les Paul Modern and a Mickey Baker signature guitar with flatwound strings. I also played one of Joe’s guitars, which was pretty nice. All those solos were done right there with the band. I was standing between Josh Smith and Reese Wynans, and it was a great place to be.

Why is this happening now?
It took me forever to figure out who I was. Another thing is that I think the music culture is more accepting of all varieties of humans who don’t look like models. I call myself the Bernie Sanders of guitar (laughs); people love me for who I am. I’m not your typical polished human. I play for a lot of Millennials and they dig the honesty.

It sounds like Bonamassa refocused your brand for blues fans.
It’s what I’ve always needed, but it had to be the right person. I floundered because I love so many styles of music. There were times when I tried to play it safe for the label and soften the edges, but it was good to have Joe’s third eye. I’ve done a lot of records I wanted to make. On Rise, I had full control but it was all over the map. If Joe had come around 20 years ago, I would have been resistant, but I’ve gotten out of my system all the things I’ve wanted to do. I was always real about who I was on stage and in the studio. If you’re going to be in music, you have to be a tough motherf***er (laughs). It ain’t pretty out there, but if it’s what you love, it’s worth it in the end.