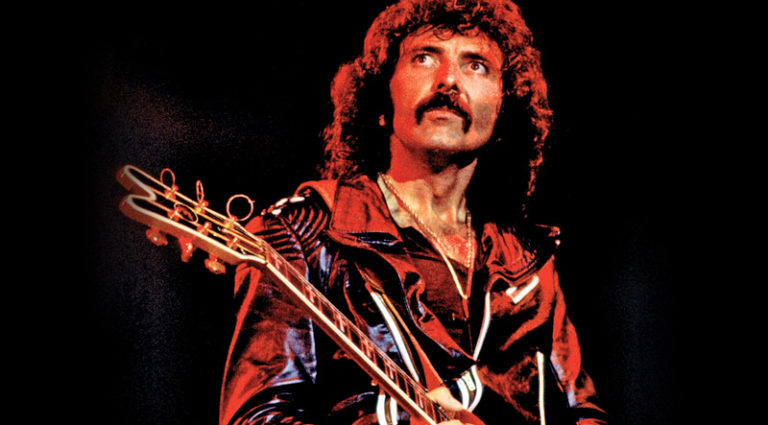 Black Sabbath sounded reinvigorated and refocused on its first two albums of the ’80s – Heaven and Hell and Mob Rules. The reason? The arrival of singer Ronnie James Dio, who replaced original vocalist Ozzy Osbourne and breathed new life into the music. This year, both albums have been remastered and expanded to celebrate their anniversaries.

One of rock’s all-time great riff masters, Tony Iommi recently sat with VG to look back on a stellar Sab era.

What was your guitar setup for Heaven and Hell and Mob Rules?
On Heaven and Hell, I used a Marshall [model 1959 Super Lead], and effects in the studio were a delay, certainly, on the solo bit for “Heaven and Hell.” I didn’t really use a lot of effects; the only ones I tended to use were a chorus, a delay, and a wah, really. I had John “Dawk” Stillwell come in – he used to build Ritchie Blackmore’s amps – and he lived with us while we were writing and recording in Miami. We had six Marshalls that he rebuilt with an extra stage so they were a bit more potent than a regular Marshall. He’d done away with the treble booster I had forever. I was really not happy about that (laughs). He’d thrown it away and I didn’t know. He said, “You don’t need that. You just go straight into the amp.” Which is what I did. I was using the John Birch and the Jaydee guitars.

How would you compare both of those guitars, which are SG copies, to a Gibson?
I had them built differently, with 24 frets. And because I invested in John Birch, they made me whatever I wanted – 24 frets and the neck lacquered. But I’m playing the original SG now again and it’s great – just a unique sound with the single-coil pickups. The Jaydee and John Birch pickups were encapsulated in a case that would prevent a lot of the feedback, which is what I’d done on my Gibson in the first place.

Not a lot of people know that Ronnie stood in as bass player for the writing of Heaven and Hell.
At that point, Geezer [Butler] had left because he had personal problems to sort out. And Ronnie played bass before, so he jumped on just to keep the momentum going with Bill Ward and myself. Then, I brought in my friend from England, Geoff Nicholls, to play bass while Ronnie sang. It worked out that way for a bit and at the end of the day, we kept Geoff – he played keyboards and was on quite a lot of stuff from Heaven and Hell onward.

How responsible was producer Martin Birch for getting your guitar sound on those two albums?
Martin was a great help to me, in particular, because I could take it easy a bit with trying to be involved in the production. So, I’d have somebody there who was brought in as a producer. And he was good – he got some different ideas for me, and it worked. I had a different sound for those albums than the earlier Sabbath stuff – a bit tighter and a bit more present.

What do you think your next musical project will be?
Who knows! I’m doing different stuff at the moment. I played on a track with [Pink Floyd’s] Nick Mason – a song for a charity project. I think Ronnie Wood played on it, too, and Geezer has played bass. Because of this pandemic, we had to do it individually, but Nick had a great idea, writing lyrics using letters from the war that soldiers sent home before they were killed. He got them from different people and it’s a really good idea.

I’m doing different stuff at the moment – writing riffs and waiting to record them properly after this pandemic eases up and I can get my engineer here to work. But I don’t know what they’re going to be, whether I want to use a singer, or use them as a movie thing. The world is my oyster at the moment – I’m quite open for a lot of ideas. It’s exciting in a lot of ways.