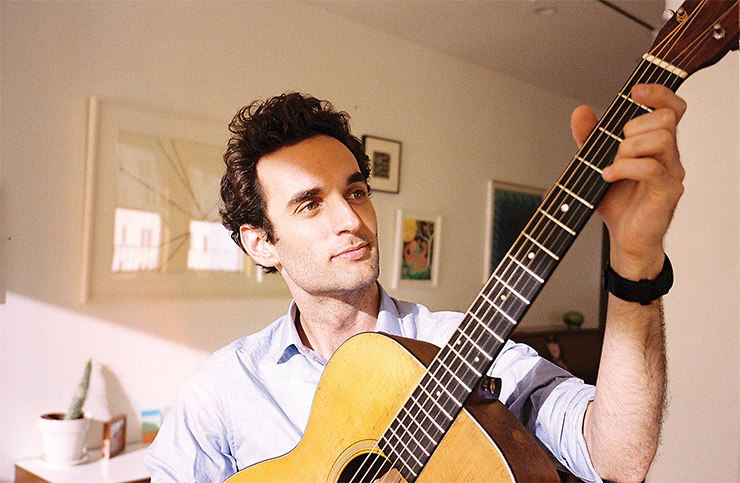 People having been raving about Julian Lage since he was a young guitar prodigy almost 20 years ago – he even jammed onstage with Carlos Santana at the tender age of eight. Over the past half-decade, the 26-year-old has become a brilliant guitarist who’s taste and depth bely his youth. Lage’s latest recording, World’s Fair, contains a series of solo-acoustic tracks that range from subtle and introspective to bold and virtuosic. We checked with the young guitar master about his vintage guitar heroes, interest in carnival music, and love for the majestic guitar music of Andrés Segovia.

One of the themes on World’s Fair reflects an interest in pre-war guitar music. Which early-20th-century players intrigue you?
Growing up, I was into Oscar Aleman and Eddie Lang, both of whom [jazz-bluegrass mandolinist] David Grisman turned me onto when I was about 11. I also loved Robert Johnson, and in the past few years have started to learn more about early innovators like Roy Smeck and Lonnie Johnson. There is something so vibrant about these players that kind of defines an era or genre, yet really brings so much music out of the guitar.

Some tracks, like “Double Stops,” is reminiscent of carnivals and circuses, while “Peru” brings to mind classical string quartets.
I do love circus-related music and, in fact, am interested in anything that has a sense of humor mixed with wild voice-leading and melodies. As for string quartets, I continue to be obsessed with the Beethoven quartets, and always loved Ravel and Debussy’s string quartets. Thomas Ades’s “Acadiana” is one of my favorites, too.

In 1982, Spanish classical master Andrés Segovia filled the 2,600-seat Symphony Hall in Boston with the sound of just one unamplified classical guitar. How did he influence your “orchestral” approach to solo guitar?
The thought of Segovia playing solo – with no amplification – in a venue like that is one of the most inspiring images I can think of. That was one of the many things I feel we can attribute to Segovia and his widespread influence; this ability to legitimize the guitar in a certain way as a concert instrument. Not to say this didn’t occur before, but he brought it into a certain light that, as fan and music student, I have always admired. One guitar can deliver so much music and you don’t even have to literally play all the parts because there’s so much implication and shading from the instrument. Segovia’s guitar music teaches me that constantly.

Which guitar did you use for the World’s Fair sessions?
A late-1939 Martin 000-18 I’ve been lucky to play for the past few years. It has a small string spacing, and was at one point worked on and put back together by T.J. Thompson. It has some of his wonderful energy and spirit intertwined with the old and beautiful Martin sound.

Strings and picks must be crucial to the delivery of your music.
They are, indeed. For strings, I’ve used D’Addario Phosphorous Bronze 12 gauge strings for many years. I changed them once on this record, though most of the takes came from one set of strings. For picks, I use a Blue Chip TP50 with beveled edges and have been for a long while now. I sometimes use a slightly lighter version for playing electric.

How do you minimize finger-squeaks on such an intimate recording?
I don’t think too much about finger-squeaks and actually kind of love them. But in retrospect, I think I tried to keep my left-hand touch as light as possible when transitioning between different areas of the neck.

Do you collect any vintage guitars?
Other than the ’39 Martin I used for this recording, I have a ’32 Gibson L-5 I really love, as well as a Linda Manzer Blue Note archtop. That guitar is starting to become vintage-sounding in its own way.

Guitarists must ask you for tips all the time. What are some of your top ones?
I often ask myself if I’m playing the music I want to be playing – and if not – am I playing it the way I would dream it sounding? That helps to keep me honest and hopefully engaged with the music. Secondly, I try to take cues from my body as much as possible when playing. If something is hurting or doesn’t feel right, I think it’s really important to stop and rest. So much of our practice and development times happens away from the instrument, as well as when we’re playing, so it’s important that we take good care of ourselves no matter what.