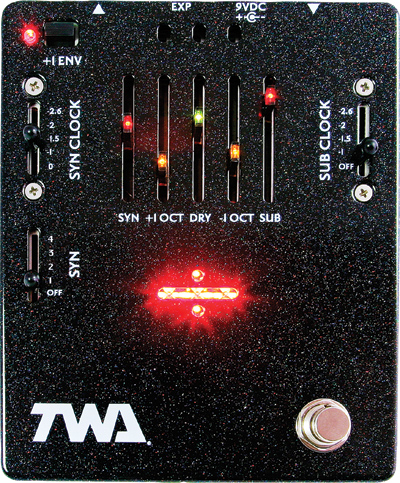 Despite its cumbersome name and the fact it looks like it might require an MIT degree to use, the TWA GD-02 Great Divide Analog Synth Octaver is simple and relatively intuitive to use – and a lot of fun.

At its heart, the Great Divide is an octaver (hence the illuminated division sign on the face), which essentially divides a guitar’s signal and gives the player options to add notes an octave below or above the original note. With its synth mode, however, the GD-02 goes beyond simple octave-doubling to offer a bevy of weird, thrilling effects; it’s something Frank Zappa or Jeff Beck would’ve been all over back in the ’70s, when players were doing crazy things with ring modulators and fuzzboxes or plugging guitars directly into Moog synths.

Happily, the Great Divide is a breeze to use. Its Dry slider provides unadulterated signal as a reference, and among the five faders are those for Syn and Sub, which control output levels of the sub voices. Playing around reveals sweet spots that tickle the eardrums. Finally, +1 Octave and -1 Octave sliders control treble and bass octave notes. Flanking these are the Syn Clock and Sub Clock faders, which control one- or two-octave drops, or a choice between 1.5 octaves down (octave and a fifth) or 2.6 (two octaves and a sixth). On the lower left of its face is another switch – Chopped Saw + Pulse, Saw + Pulse, Square, and Modulated Square – which tweaks the synth voices. Remember, this is an all-analog pedal, so its sounds are the real deal.

On top of all of this is an Expression-pedal jack to plug in a TRS pedal. Plus, stomp-o-holics can remove the bottom panel and tweak enough trim pots to make them giddy. Other tricks include using the guitar’s neck pickup or rolling off the Tone knob, which can reduce “farts” and tracking errors. Or, put a compressor before the pedal to control the big sub blasts and deliver a steadier signal. You’d be well-advised to read the manual, as improper use can be detrimental to other pedals, amps, speakers, or what have you. Read the manual!

So, who’s going to want the TWA GD-02 Great Divide Analog Synth Octaver? Clearly, players who like to add a bit of the unusual to their tones, be it alt-rock, psychedelia, Texas-fried avant blues, or loopy art rock. It’s a blast, with a ton of kooky tones to explore.