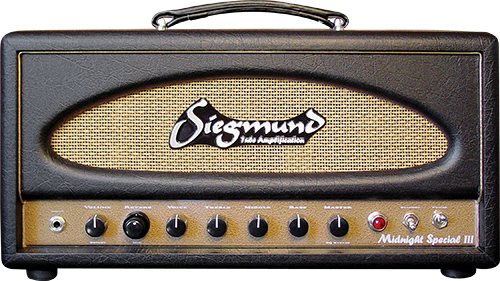 Driven by a quest for preserving the original tonal qualities of a player’s instrument, builder Chris Siegmund created the Midnight Special, an attractive and great-sounding single-ended Class A amp that brings many of the bells and whistles of larger units to a small amp that can be played at bedroom volume levels.

Available in both head and combo versions, the Midnight Special is designed to accept a variety of different tubes in the rectifier and power sections, offering the player tonal variations to fit their individual style. Our test unit arrived in the head configuration with an attractive blue sparkle covering (the owner’s request). For test purposes, we connected the Midnight Special to a 1×12 Celestion open-back cabinet, and also to a 2×12 closed-back cabinet. We were pleasantly surprised at the amount of air this little 15-watt amp pushed around and the variety of good tones it produced.

Test guitars included a 1966 Fender Stratocaster and a Gibson dot-neck reissue ES-335, and the Midnight Special reacted very differently to each. We also swapped out the power tube, first using a 6L6 and then changing to a KT66, producing a difference that, likewise, was also very apparent.

Using the 335 with the 6L6, the Midnight Special produced a very warm, round tone that broke up perfectly for rock rhythms and leads. Because of the tube rectifier, the amp has a certain amount of natural compression and sag, which causes notes to bloom. The KT66 also liked the 335, and differed in the fact that it produced slightly more headroom, allowing the guitar to stay cleaner without breaking up.

Both tube configurations also brought out the best qualities of the Stratocaster, especially in the second and fourth pickup positions where a great deal of “quack” gave the impression that the Midnight Special would be an ideal recording amp. Because the Midnight Special seems to be very input-sensitive and the Strat’s pickups were not as hot as those on the 335, we used a vintage Ibanez TS-9 to bring some additional distortion required for lead work. The result was spectacular. The Midnight Special also proved very effects-friendly and sounded fantastic when hit with both a wah-wah and the overdrive.

The Midnight Special also features a line out called the Live Amp Sound (LAS), which is a special design using a high-quality Jensen transformer to mimic the behavior of a moving voice coil. It rendered a very natural amp sound, even with no speaker connected; line-out signal was always present. With a speaker plugged in, it can be added to the recording mix for another layer of guitar sound. For a live gig it can be sent to the PA mixer. And with the speaker unplugged, an internal load kicks in with a 16-ohm impedance. The line-out to a mixer with headphones could be used for late-night recording or silent practice sessions.

Additional features include an effects loop and a very interactive tone section that allows the player to get a wide variety of tones from mellow and darker sounding to bright and chimey. Pulling the master Volume knob out bypasses the entire tone stack, allowing the guitar’s pickups to be the sole tone control. One can envision the Midnight Special being a very useful amp for players with styles ranging from jazz to blues rock.

A key component of the Midnight Special that sets it apart from other Class A amps is its luxurious reverb section. Controlled by a concentric pot on the front of the amp, the inner knob regulates the intensity and dwell while the outside knob mixes the reverberated signal with the dry signal. The reverb can also be controlled by an on/off pedal plugged into the back of the amp via a 1/4″ jack.

The Midnight Special is a new twist on a tried and true single-ended Class A design – and a whole lot of fun to play through. The head is also available in push/pull Class A/AB 20 watts and 30 watts for more power… perfect for bedroom, studio, and small club work.