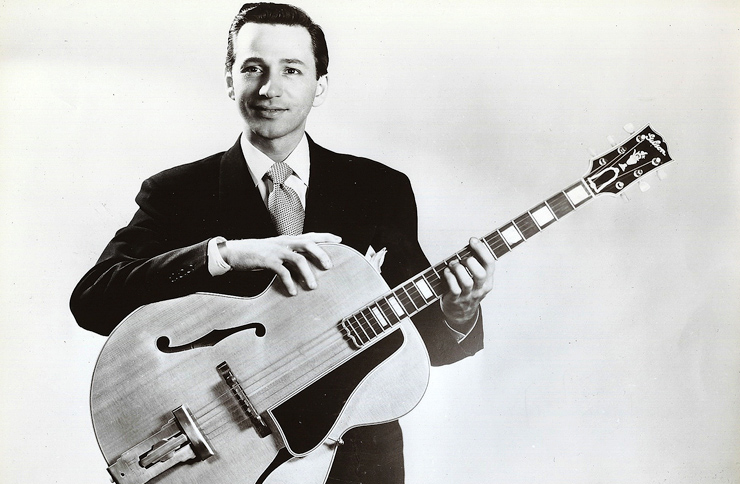 Guitar great Billy Mure (born November 4, 1915) passed away September 25, at the age of 97. He last performed on August 2, playing Dixieland banjo at Squid Lips, where he lived in Sebastian, Florida.

Mure played on innumerable sessions from the ’50s to the ’70s, but is best remembered for his Supersonic Guitars albums, which achieved a remarkable marriage of jazz, pop, and rock and roll.

Jazz legend Bucky Pizzarelli remembers, “Billy was so busy. He was on WNEW, doing 15-minute radio shows all day long, and between those shows he was doing three record dates a day. I don’t know how he squeezed it all in, but he was a workhorse. There were a lot of dates where Billy was the arranger, and it would be Billy, George Barnes, and me. On the Supersonic stuff, he had more like five guitars – including me on (Danelectro six-string) bass guitar, Al Caiola, Tony Mottola, Al Casimenti, Don Arnone, and himself. Billy had his own style, and he wrote things out for the other guitars; sometimes George was the soloist.”

The aforementioned radio shows were “Make-Believe Ballroom” with William B. Williams and later “The Arthur Godfrey Show,” each for 10 years.

His son, percussionist Gary Mure, recounts, “His parents came from Sicily and settled in the Bronx. His given name was Sebastian Muré. At five years old, he’d taught himself to play the violin, which he played outside his father’s barber shop, with the case open, to get money for the family. He was a self-taught guitarist, because he came from such a poor upbringing.” (Mure served in WWII, and while in the military he played string bass in the jazz band and tuba in the marching band.)

In the late ’50s, he came up with the Supersonic Guitars concept. Rather than using overdubs a la Les Paul, he brought in five guitarists and three drummers, according to Supersonic Guitars In Hi-Fi, to play his charts – to a repertoire that ranged from standards like “Pennies From Heaven” to boogie-woogie on steroids.

In addition to at least four Supersonic LPs (guaranteed to “break the sound barrier right there in your home!”), he cut albums of Hawaiian music, The Songs Of Hank Williams, bossa nova, cha-cha, teen-targeted instrumental rock, audiophile stereo LPs centered around percussion, and A String Of Trumpets, whose title track was a minor hit single.

But it was the Supersonic outings that later grabbed hold of guitarists two and three generations Mure’s junior.

Retro-billy Deke Dickerson declares, “Undoubtedly, Billy Mure could lead an orchestra, read charts, and play a jazz gig, but just give a listen to ‘Tiger Guitars’ and tell me he’s not one of the great unsung rock and roll electric guitarists of the 1950s.”

Producer/guitarist Mike Mariconda recalls, “In the early ’80s, a used copy of Supersonic Guitars came into the record store where I was working. Immediately it filled a void of a more technically sophisticated style, unique, classy production, and the whole space-age connection. With no internet at the time, he was a complete mystery. Our cover version of ‘Tiger Guitars’ was one of the first songs I ever recorded with my group, the Raunch Hands.”

When asked in 1990 how he managed to not only adapt to rock and roll but be a step ahead of the curve, he cited “Rag Mop” by the Ames Brothers as perhaps the first hit record to feature “a lead guitar with a rock and roll feel.” Listen to his solo – cut in 1950, mind you – and you’ll become a believer.

Mure arranged “Bobby’s Girl” by Marcie Blane and produced “Tell Laura I Love Her” by Ray Peterson, both Top 10 hits – as were records he played on by Paul Anka (“Put Your Head On My Shoulder,” “Diana”), Johnnie Ray (“Cry”), Bobby Darin (“Splish Splash”), Johnny Mathis (“Chances Are”), Eydie Gorme (“Blame It On The Bossa Nova”), and countless others. He was also guitarist on TV shows by Jimmy Dean, Perry Como, and Barbra Streisand.

His son, Gary, graduated from Julliard and toured as Peter Nero’s drummer in addition to playing on albums by Jimmy McGriff, David Spinozza, and Astrud Gilberto, as well as A Quad Sound Spectacular with his dad.

“When he was 64, my father moved to Florida, and he started playing solo guitar in a lounge, and that resurrected his career,” he said. “In New York, he’d gotten replaced by the younger guys, but he was playing all over the restaurant circuit in Florida – sometimes two or three times a week, every week, up until his death.”

In 1990, Guitar Player lent its logo to Rhino’s Legends Of Guitar series. On the ’50s Rock, Vol. I CD, “Tiger Guitars” was included, with Mure rightfully taking his place alongside cuts by guitar heroes like Chuck Berry, Duane Eddy, and Carl Perkins.