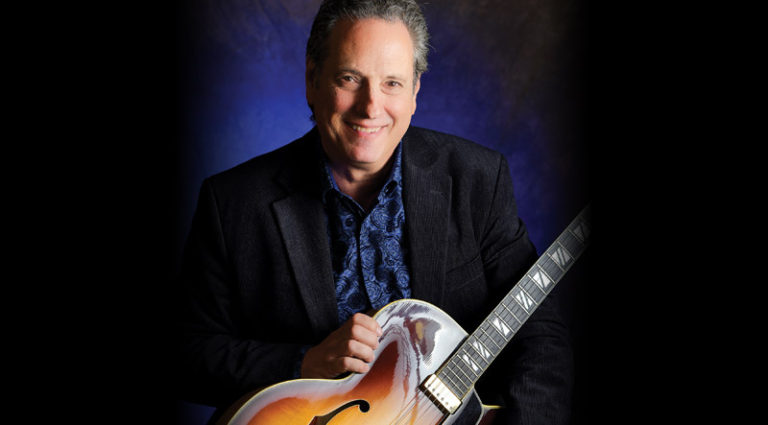 Like many musicians, guitarist Les Sabler’s life has been turned topsy-turvy by the worldwide pandemic.

Originally from Montreal, Sabler now resides in Nashville, but work on his newest album, a smooth-jazz effort called Tranquility, began in February of 2020 at producer Paul Brown’s studio in Los Angeles. The project ultimately became remote, but not before Sabler became inspired by Brown’s Gibson Johnny Smith archtop.

“My primary guitar for decades has been my ’68 ES-335, and I brought a custom-built dual-humbucker guitar made by Charles Whitfill,” the guitarist said. “But when we first sat in the studio, Paul handed me his beautiful ’63 Johnny Smith, which felt very comfortable and had a distinctive sound that was a good fit for ‘Keep Pushin.’

“When I returned to Nashville, I started looking around to purchase one and was very fortunate to obtain the ’67 I’m now thrilled to own. It has the same headstock as a Super 400, but a 17″ body like an L-5, with notable differences like the cross bracing, a floating mini-humbucker, and a slightly shallower body based on Smith’s ’55 D’Angelico.”

Sabler wrote or co-wrote all the tunes on Tranquility except for a cover of George Benson’s “Sunrise,” and collaborated with New Orleans guitarist Shane Theriot (VG, August ’15) on half of the album.

“Paul sent a couple of Shane’s demos to me, and I really connected with them, which led to Shane co-writing and playing on five songs,” Sabler recalled. “He’s an excellent player and composer, and this was the first time we worked together. Shane, Paul, and myself really worked well together, and Shane’s melodic and harmonic concepts really resonated with me. Shane used a variety of instruments, including a ’59 ES-330, a ’52 Martin 00-17, a ’52 J-45, a Supro lap steel, and several others.”

Horns were arranged by Lee Thornburg and Tim Akers; “Three Dee” involved note-for-note riffing by Sabler and saxophonist Greg Vail, and is all the more impressive since they weren’t in a room together.

“Greg has an incredible ear and he learned, played along with, and complemented my phrasing on the song with precision and style, without having a chart. It’s so important to maintain a sense of band unity in the song when remote recording is necessary!”

“Certainly, there is a significant influence from Wes Montgomery and George Benson,” he detailed. “But I try to present my own personality in the performance. It’s all thumb and fingers, and no effects were used to create the octaves; in fact, the majority of my playing on the Johnny Smith was without a pick. I did use a V-Pick on the nylon-string guitars.”

He used a José Ramirez guitar for “Esselle’s Dance” and an Alvarez on “Where Has She Gone”; Sabler’s affection for nylon-string acoustics carries over from his tribute album to Brazilian guitarist Antonio Carlos Jobim.

“The Ramirez has a cutaway and pickup that I don’t use, and sounds very smooth when mic’ed in the studio,” he said. “I recorded ‘Where Has She Gone’ at Paul’s, on his Alvarez that Marc Antoine and Peter White have recorded with, and it sounds great!”

Some might wonder about Benson’s “Sunrise,” an implicitly-introductory title, being the final track.

“To me, the ending has an aura of drifting away, perhaps into a virtual sunset as the album closes. That’s a tribute to George and Chet Atkins, and it’s nice to have that Nashville connection in the mix.”

Sabler is working with Brown on his next album and looks forward to once again presenting his music in live performance.