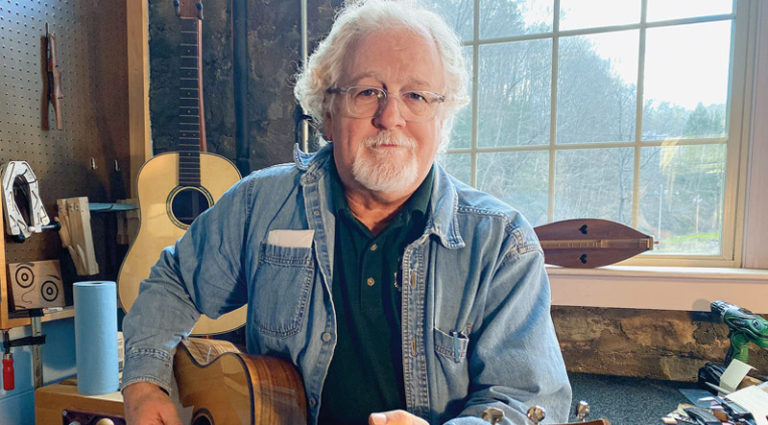 Music heals the soul. For many, crafting the instruments that make music has healing power, too.

In 2012, the non-profit Appalachian Artisan Center in Hindman, Kentucky, hired Douglas Naselroad to establish its School of Luthiery. Soon after, he was approached by a man asking to be taught luthiery to help him recover from drug addiction.

“He was trying to give himself a goal to work his way through rehab,” said Naselroad. “He was addicted to oxycodone and at death’s door, to hear him tell it. It was a serious situation.”

In ’17, the AAC created the Culture of Recovery program, designed to partner with local substance-abuse recovery efforts and the Knott County drug court to provide trade apprenticeships – including luthiery.

“I’ve never been in recovery myself, but I’ve lost people close to me – people who drank themselves to death,” said Naselroad, who started building guitars in 1969. “For some of the people here, it’s gone badly. I have a strong conviction to create a safe place for them to pursue a goal.”
The opioid epidemic has ravaged economically strained Appalachia particularly hard.

“I don’t think anyone down here has gone untouched by it,” Naselroad added. “And it’s not just opioids. It’s also meth, which hit this community as hard as anything else.”

While the Culture of Recovery didn’t have a plan to extend its reach, situations dovetailed and in nine years it has evolved to work with the National Endowment for the Arts, ArtPlace America, and the Appalachian Regional Commission. While Naselroad thought he’d be creating entrepreneurs, he quickly realized people didn’t have the money and resources to start their own businesses – they simply needed jobs. To date, hundreds have gone through the program, and Naselroad has hired some of the best students who completed the luthier apprenticeships to work full-time at his non-profit Troublesome Creek Stringed Instrument Company, which makes acoustic guitars, mandolins, and dulcimers. Proceeds from sales of the reasonably priced instruments go back into supporting Troublesome Creek.

They offer nearly 20 models.
“The guitar we’re proudest of is the Sweet Dread – a dreadnought with the depth of an OM, the round shoulders of a pre-war Gibson, and a 13-fret neck that makes it pretty groovy.”

The dulcimers are hot and the mandolins are being received really well.
“I think they raised a lot of eyebrows,” said Naselroad. “The guitars are competitive. I think people were a little more reserved about their roll-out. The biggest splash so far is with the HM Honeybee mandolins.”
Troublesome Creek will be set apart, Naselroad believes, by its use of Appalachian hardwoods.

“Locally-sourced materials make our instruments unique. We use the finest regional timber we can get, and while some are classics like curly maple and curly walnut, many are unknown tonewoods. Quilted cherry makes wonderful guitars, and things like Osage orange, black locust, and mulberry can make really nice guitars. It’s amazing, the tones we get.

“We use Appalachian red spruce because it’s from here, and it’s a phenomenal wood, especially for the mandolins,” he added. “Some is torrefied. We’ve also built some out of torrefied maple, which is really dark and pretty. A lot of times, we use butternut for necks and internal blocks; butternut is like walnut but doesn’t bring the same weight. We also use a lot of walnut, which is good for a really solid neck.”

While the goal is to steer away from rainforest woods, in the short term, they’re using ebony for fretboards and bridges.

“We bought two tons of persimmon but haven’t yet figured out how to give it an attractive color,” said Naselroad. “Still, we’re building our brand around this menu of Appalachian tonewoods – not just for environmental reasons, but because our guys love to build out of Kentucky and Tennessee hardwoods. That’s a badge of pride.”