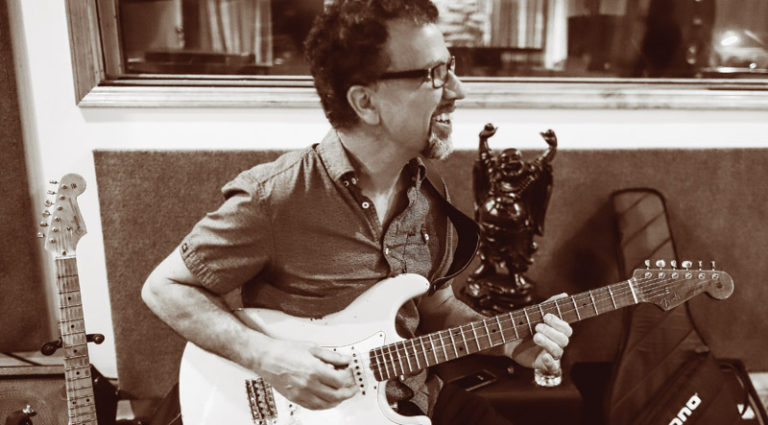 Godsmack guitarist Tony Rombola is moonlighting once again, on the third album by Apocalypse Blues Revival with fellow Godsmack member/drummer Shannon Larkin, bassist Brian Carpenter, and singer Shane Hall. The self-titled effort shows the band evolving beyond its blues-rock origins to a range of grooves including gothic psychedelia. Rombola’s playing goes otherworldly and trippy, with post-garage/stream-of-consciousness fuzz soloing coupled with big riffs and dreamy arpeggiation. It’s a dark, hallucinogenic take on the blues, and he wouldn’t have it any other way.

How are you handling the pandemic?

I’ve been doing the exact things I always do; I don’t go out much and my wife does all the shopping, so I stay home. Last year, Godsmack missed a bunch of shows, which was a bummer. Most weren’t scheduled tours, so we only lost about a month’s worth of shows. At the same time, we were about to wrap up that last record, so we have to write more music. That’s what I’ve been doing all year.

Did the Apocalypse Blues Revival begin as a specific concept?
It’s changed from when we first started. On the first record, it was pretty straight-ahead blues-rock. There were some rockabilly and shuffles and hotter rock that was more like Black Sabbath. On the second album, it shifted. Most of it came from Shannon because he was writing a lot. He writes all the lyrics so he can go in directions. It got more into a Pink-Floyd-type of thing.

The beginning of the album is very different than the end.
I liked it when it was more blues-rock. I was digging it, which is why I got into it. Shannon writes all the lyrics on his own, and I work with him on the music. A lot of the time, he’ll have a form. When we did the first record, it was just him and me jamming a lot. We’d write riffs, then music around them.

On the new record, he was writing a lot of music on his own. Now, we get together after he puts together a formula; he’d show me what the vocals are doing, and I would make up music to go along with it. It’s an opposite approach than if you record music and have to come up with lyrics.

I’ve always loved blues, and Shannon and I were just trying to make it different. Shannon likes to add weird things to trip-up the listener because he doesn’t want to be too traditional. Some of the stuff is traditional, but if you hear weird stuff in there, it’s usually him (laughs).

Did you have any rules about your guitar sound?
I was going to use single-coils, a Fender-type amp, and pedals from the very beginning – I didn’t want a Les Paul or PRS with a high-gain amp because that’s a Godsmack thing. I collect gear, so it gave me a reason to use other stuff. The new record is all one amp – a ’65 Fender Super Reverb and the sound of the room. The SR has two original speakers and two Weber speakers, and I used one of my favorite Custom Shop Strats. The album is one guitar, one amp, and my pedalboard.

What was on your pedalboard?
I have an Xotic RC Booster, which is a clean boost that’s great for jacking up clean tones. I also have an original TS808 Tube Screamer from 1980, a silver Klon Centaur, and an Analogman King of Tone, which is my main pedal; I use other pedals to boost it. I only use the Orange side of the King of Tone and I use it for everything with either the Centaur or Tube Screamer for extra drive. The fuzz pedal after that is the Analogman Sun Bender I use just for leads. I’ll use the KoT as a lead fuzz boost so the body of the sound stays fat; fuzz can get real thin, and when you bounce back and forth from rhythm to lead, it was always a hard thing. But the King of Tone keeps things pretty fat. I also have Dunlop Cry Baby wah and a Univibe clone.

What’s the latest news from the Godsmack camp?
Our singer, Sully Erna, just built a new studio, and we can’t wait to get in there and make new music. We’re going to write and record all year so we can go out with new music when it’s time to go out.